Besides not seeing my family and Jersey girl(friends) as often as I did when I lived in New Jersey, top on my list of what I miss are the wonderful vegan dining experiences so readily available in Manhattan and Philadelphia. I know what you might be thinking, that living in Sedona I have the Phoenix metropolitan area nearby, which has a plethora of restaurants that cater to the veg community. While, yes, that’s true, I’ve tried all of them. Many times, in fact. However, I sadly have to admit that I am underwhelmed and unimpressed with them. What I wouldn’t do to have a Vedge, or Millenium, or Candle, or the newer kid-on-the-block, Delice and Sarrasin within my local community! 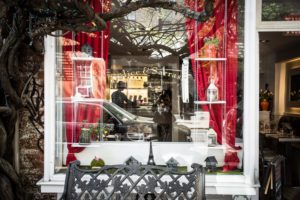 So, Delice and Sarrasin…..located in the very hip section of the West Village, Delice and Sarrasin is nestled on a tiny street, Christopher Street, in what I think is less than a 500-square-foot dining area. But, oh, what comes out of their kitchen is absolutely French magic!

During our recent vacation to New York, Richard and I were fortunate enough to score reservations. Trust me, this was truly a feat since the Sunday that we went also happened to be the New York City Pride Parade, which lasted from noon until 9pm, and went directly in front of the restaurant, ending at the end of the street. We felt like we hit the lottery when we were able to get the reservation as it was the only evening that was possible for us. Getting there presented a bit of fun and adventure in itself… If you’ve ever been to New York and tried to walk in the hustle and bustle of their busy sidewalks, multiply that tenfold. Add to that the vibrant scene of not only the parade itself but possibly even more so, the spectators. We had to stop to take in all in more than several times. The positive energy amidst the crowd was contagious and added to the excitement about the approaching culinary indulgence we were about to experience.

Wanting to savor the flavors of as many options as possible, we decided to order and split two appetizers. 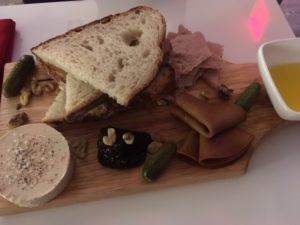 Richard selected that evening’s appetizer special, which was a charcuterie platter of pate, vegan sliced meats, jam, and gherkins.

I knew immediately that we were ordering Escargot Beurre Maître d’Hôtel, basically vegan snails made from oyster mushrooms and smothered in garlic and herb butter. 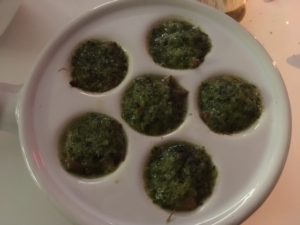 The Escargot came in the traditional escargot plate, a round server with six wells, one for each ‘escargot’. As it arrived to the table, the fragrance was intoxicating! The garlic, the butter, the herbs. But, the true test would be the taste. The fact that the mushrooms were finely diced instead of one piece as would be in the case of the traditional dish was only slightly distracting because the escargot was spot-on. It’s been many years (35 years, to be exact) since I went vegetarian, but I can still remember the ambrosial bouquet and flavor sensation of French Escargot. Alas, I no longer have to reminisce. I don’t think I’ll ever be able to go to Delice and Sarrasin and not order this dish. It was truly one of the most outstanding vegan dishes I’ve ever eaten! That is no exaggeration. It is the honest truth. Memorable. Obsessive. Absolutely to LIVE For! 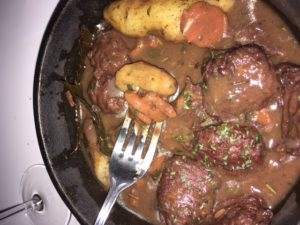 My culinary inspiration came from two people, my maternal Grandma Mary, and Julia Child. While other kids were racing home to go out and play, I’d dash into the living room and turn on the television to watch The French Chef. So there was no doubt what entrée I would be ordering…of course, it was the Boeuf Bourguignon, a “beef” stew with pea protein “beef” cubes marinated in red wine along with carrots, pearl onions, and fingerling potatoes. It came to the table in a cast iron pan. The beef was moist yet had an evocative chew that one would expect from a meaty dish, while the vegetables were pleasantly al dente yet cooked. The red wine was reduced to a hearty, luxurious gravy that encapsulated the succulent flavors of the stew in one bite. 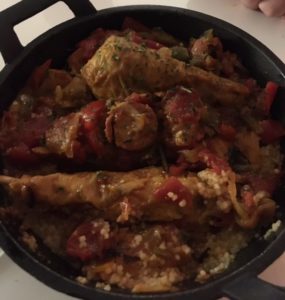 Not to be outdone, Richard ordered the Poulet Basquaise, vegan chicken legs that were slowly cooked with vegan chorizo, melted peppers, onions & tomatoes served on a bed of couscous in a cast iron pan. Richard, who typically despises peppers, decided to order the dish without the modification of eliminating the peppers as he wanted to experience the dish the way Chef Yvette Caron intended it to be prepared. He savored each and every bite in between exclamations, such as how each ingredient retained its integrity and was able to stand on its own while at the same time melding together to create a cohesive and enchanting dish; or how even an omnivore would be wonderfully sated with the dish.

And as if that wasn’t enough….they have a carefully-selected vegan French wine list that pairs exceptionally well with all their menu items. 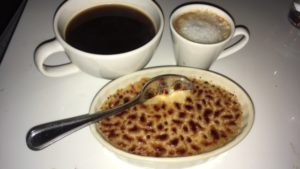 Although we were both admittedly sated from our gastronomical feast, we couldn’t pass up the opportunity to delight ourselves with their Orange Crème Brulee. The white ceramic ramekin was cool to the touch while the burnt sugar topping clinked when tapped with a spoon. Once cracked, the caramel broke away, revealing the rich, creamy, orange-infused custard below. A dessert Magnum Opus!