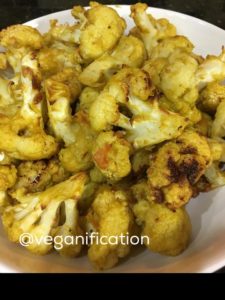 So, I had this head of cauliflower; and I just wasn’t feeling plain old steamed cauliflower. And I’d definitely had my fill of cauliflower done up as a riff on mashed potatoes. Now, I’m not saying there’s anything wrong with either of them; I just wanted something different yet still quick and easy.

I’ve been playing around with my air fryer, so I had an idea…here’s what I came up with.

I cut up the cauliflower and parked in a large bowl.

I started the air fryer to preheat at 390 degrees Fahrenheit while in another bowl, I added some garbanzo bean flour, turmeric, some Indian spices, salt, pepper; and whisked them together. I then added in some soy milk, enough to make a loose batter –think a little bit thicker than tempura not as thick as pancake batter.

I then tossed the batter into cauliflower and kept tossing until all the nooks and crannies of the cauliflower were coated, then lightly shake to remove any excess batter. (You could first toss the cauliflower in some garbanzo bean flour, which would help the batter to stick. To be honest, I was in a hurry, so I skipped this step and was quite satisfied with the outcome.)

Depending on how big your basket is and how much cauliflower you use, your cook time may vary by a couple minutes either way.

What I wound up with was cauliflower whose batter became crunchy while the cauliflower was al dente. It was positively gratifying. I can’t believe I ate the whole batch, but I did!

*An important aspect of sharing original recipes is to give proper credit to the author(s) of the recipe(s). I hope that you enjoy using these recipes and making them your own; but please do so with that integrity in mind. With much gratitude. Linda