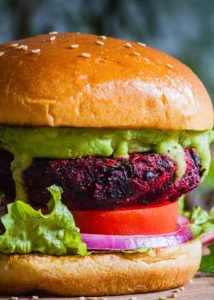 For our first two years, Richard and I had a long-distance relationship, he living in Washington State and I in New Jersey. We’d meet somewhere across the country for our rendezvous, but our favorite place was what has now become our home—Sedona, Arizona.

The first time we met in Sedona was the first opportunity I had to cook for him. Oh, one important fact to note–Richard was not vegan. In wanting to ensure that I was able to create meals that would please this omnivore in my vegan home, I asked him what foods he enjoyed eating. His response—“I can tell you what I don’t like. I hate beets!)

Ok, so you know what was going to be on the main stage (his dinner plate) for the first meal I served him, right? Why, of course, beets!

So I had my work cut out for me. I had to figure out a way to camouflage this wonderfully earthy and distinct root vegetable with a well-defined flavor in a way that he wouldn’t figure out that it was beets he was eating.

After much pondering (and wondering whether or not it was a good idea to be this adventurous and bold as to serve beets as his first and what might, then, turn into the ‘last’ supper), I came up with the idea of making a burger.

I have to tell you that even I was astounded at how epicurean they were! As a result of these burgers, Richard is today officially a beet convert. Success!

Here’s how I won him over….(see, it is true!  The way to another person’s heart is through their stomach…although I prefer to think it was more their taste buds)