Summer vacation arrived for Richard and I on June 20. This was not going to be any ordinary vacation. We had several destinations on tap, starting with Manhattan, then to Woodstock (where The Aquarian Exposition, aka Woodstock, did not actually take place), then to Bethel Woods Center For the Arts (where is 1969 Woodstock Festival did take place, about 67 miles southwest of Woodstock), then off to Washington State to visit two of Richard’s three adult children. All in all, we were going to be away for a total of 20 days. And so it began….. 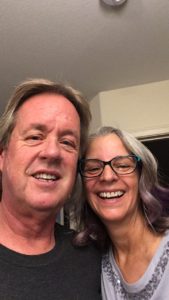 Excited to be heading back to New York City for the Main Street Vegan Academy’s Master Vegan Lifestyle Coach and Educator certification, we rented an apartment in Harlem just north of the northwest tip of Central Park on Frederick Douglas Boulevard. It was a sweet place to land in Manhattan as there was a subway stop less than a block away from the apartment. Sweet!

And, oh, to be back in my stompin’ grounds, having been born and raised twelve miles outside of Manhattan on the Jersey side. Sheer joy! The plethora of scrumptious vegan options abound on that island.

As has become ritual when I arrive in Manhattan, the first place I head to fill my tummy with delectable vegan food is one of the Candle Restaurants. Being a food snob, I am all-to-often disappointed by the less-than-mediocre food that is served in far-too-many vegetarian/vegan restaurants throughout the country. But NEVER, no, NOT EVER, is that the case with the Candle group. Joy Pierson and her partner, Bart Potenza, are culinary masters in the veg tradition.

In fact, my very first visit to Candle Café was back around 1995 when my then-husband, son, and two stepsons took a jaunt into Manhattan because I had ticket for a live taping of a Food Network show called “Ready, Set, Cook”. As it turned out, the show was a vegetarian segment (unbeknownst to us until we arrived on the set). So, during the commercial filming break when they asked who would like to come up and be an audience taster, I quickly jumped out of my set and yelled “I’m a vegetarian. Choose me!” Not only did they choose me, but because the way I described the food (which included “a mélange of flavors bursting in my mouth”), I was given a quick ‘spot’ on the show to describe the flavors. For my contribution to the show, I was gifted with a huge tabletop convection oven, which we then had to take turns carrying around the City the rest of that day.

I didn’t tell my family that we were going to a veg restaurant, but kept telling them that we were going to this great place that’s known for their burger and fries. When we got to Candle Café, I ordered five along with a variety of shakes to go with our burgers. While I was the only vegetarian (at the time) in an omnivore family, no one ever realized that they were served vegan burgers. They devoured them! And then followed that up with some of Candle’s yummy cookies which were on display atop the counter as you walked in. And thus, my love affair with Candle began (and remains steadfast to today).

Well, I digressed here for a moment…..back to my present-day Candle Café excursion…. 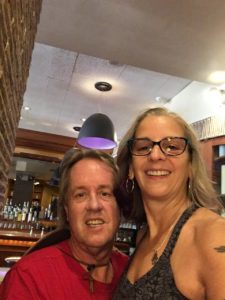 Ready to take the plunge into our delectable meal

My mouth begins to salivate before I even step foot into a Candle restaurant in anticipation of what is to come. For our first Manhattan meal this time around, Richard and I choose Candle Café West.

Now, before Richard and I met, he would frequently vacation in Mexico; and thus, he prides himself on being a gazpacho connoisseur. That day’s soup special was, of course, gazpacho (otherwise I’d have no reason right now to be telling you about Richard’s affection for that cool, refreshing soup that titillates the senses with the bounty of the summer harvest). For starters, we decided to each order our own cup of gazpacho as the server told us it was probably his favorite item on the menu that day. Oh my! I was hooked from first spoonful. The soup retained the integrity of texture while having a silkiness to it. The amount of jalapeno provided a burst of flavor with barely a scant amount of heat. Richard concurred. He stated that it was, undoubtedly, the BEST gazpacho he’d ever eaten. 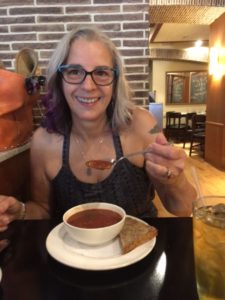 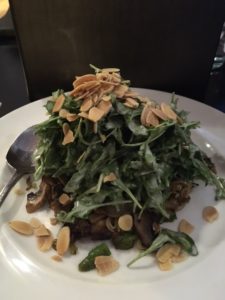 Next was a shared course of Candle’s rocket (arugula) and Wild Mushroom Salad. Being one who can never get enough mushrooms, this salad met all expectations. The meatiness of the mushrooms was a wonderful juxtaposition to the spicy bite that the arugula and horseradish dressing brought to the plate alongside the sweetness of the corn. Textural heaven was created with the crunch of slivered almonds. A masterpiece!
Entrees were not shared, but we did taste each other’s selections. 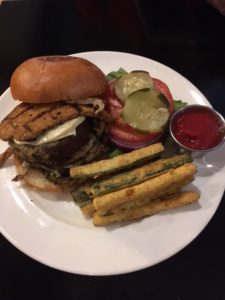 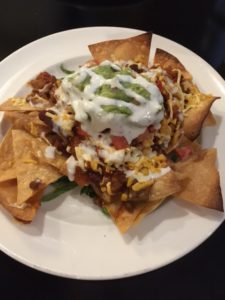 I went out on a limb here and opted for the Candle Nachos. They were not a typical nacho platter in that the chips, although made from cornmeal, are light yet sturdy, freshly-fried and nestled atop a bed of chiffonade lettuce. Adorning the chips was a chili grilled seitan, chili, corn, tomatoes, pico de gallo, tapioca cheese, tofu sour cream, and guacamole. A real treat and taste sensation! 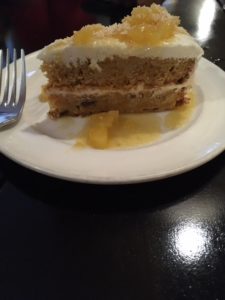 We rounded out the meal with a shared piece of their always-dependable carrot cake. 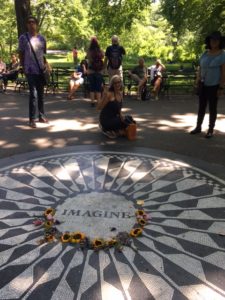 After our leisurely two-hour lunch, we meandered out into the streets, bellies full and perfectly sated, heading over to Central Park and Strawberry Fields.