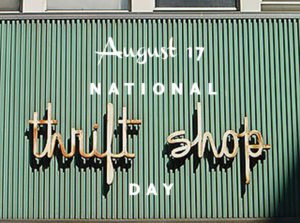 Today, we are honoring National Thrift Shop Day, which is August 17.

What a fabulous way of not only saving a boat-load of dollars while also stopping items from heading to a landfill! Many thrift stores’ proceeds benefit a community organization, such as an animal shelter, women’s shelter, Goodwill, Salvation Army, etc. Here in the Sedona area, there are more than several, all of which are non-profits that benefit worthy causes.

A personal benefit when buying clothing is that you can experiment with a new style or color(s) without breaking the bank. In addition, since the clothing has typically been previously laundered, you won’t have to worry about shrinkage. And oh, if you like designer clothing, there’s a good chance you’ll find some.

So, one of my emails is LVShopTillIDrop; and correspondingly, one of my favorite mottos is… 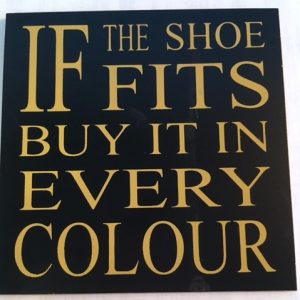 So that being said, I can never pass up a great bargain, especially when it is also in alignment with Reuse, Recycle, Renew.

Being a Jersey girl who grew up in the 60’s and 70’s (for me, the 60’s really ended sometime around 1971ish), on my recent vacation to New York, it had to include a trip to Woodstock, New York. Now I know that the Aquarian Exposition, which we have come to call Woodstock, did not actually happen in the Town of Woodstock but rather approximately 50 minutes east in the town of Bethel, New York. However, one of my favorite movies is “Peace, Love, and Misunderstanding”, which takes place in Woodstock. So, since we had plans to go to the actual site, which is now Bethel Woods Center for the Arts and the CIA (not the Central Intelligence Agency but rather the Culinary Arts Institute of America), we decided to pay a visit to the Festival’s namesake.

We landed there mid-week, so it was somewhat of a sleepy town. In fact, the vegan restaurant that I had planned on eating at was closed for the day. Oh well, what to do? Well, the main street is peppered with all sorts of shops, so shopping it was.

And off the main drag at the town center circle, was the find! Rock City Vintage, a curated designer of original and vintage clothing.

This was not your ordinary thrift store at all. The shop was like walking into a blast from the past. And every garment was in exquisite condition. I spent more than several hours perusing every rack and shelf in addition to trying on everything that appeared to be my size.

The proprietor, Molly Farley, is a very sweet and talented seamstress herself. In addition to vintage clothing and accessories, she also has some of her own original designs with a vintage flair. You’ll even find some other local artists’ items as well.

My purchases were many, from vintage boots and shoes, to amazing dresses and shirts. 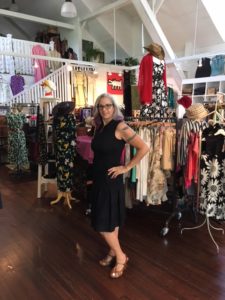 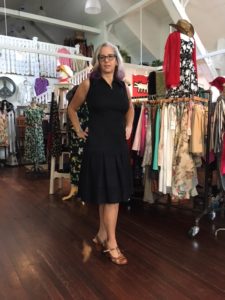 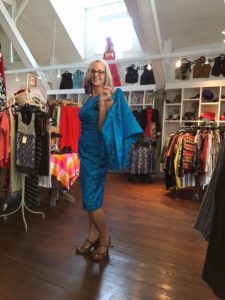 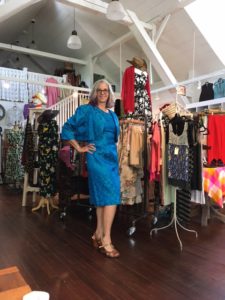 So, this Thursday, head out to your local thrift store.  I’d love to hear about your successful finds.  Please share photos and stories as a comment to this blog post and/or on Veganification’s Facebook Group page at https://www.facebook.com/groups/361294954287407/