On March 19, 2018, my friend, Lana, and I attended the Vegan Community Dinner, which is held at Community Cuisine, Kitchen Sharing, 2245 E. Washington Street in Phoenix, Arizona.

So, exactly what is a Community Dinner, you ask?

Food insecurity is a global issue; and here in the United States, estimates are that 17 million households are beleaguered with this issue daily.

In response to this global crisis, neighborhood cafes are set up which offer a pay-as-you-can meal gathering people at the table from all walks of life, from the entire spectrum along the socio-economic scale.  The concept is actually a rather simple one that has profound effects.  According to One World Everybody Eats, these community dinners feed over 4,000 meals a day to individuals throughout the U.S. 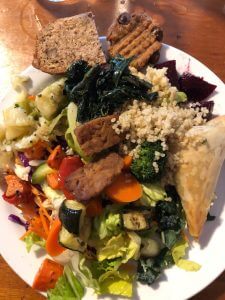 Nutritious and delicious vegan food is served with dignity at the Phoenix Community Dinner.  Relationships are forged.  Feeding people in this way has the power to bring people together in community, not just during the meal but equally important during the preparation and clean-up. 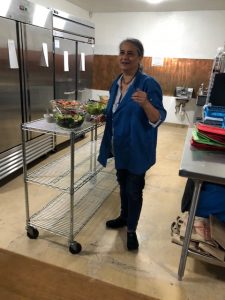 Ingrid Hirtz, the Community Cook, has modeled the Phoenix Community Dinner after the one World Everybody Eats prototype.  According to Ingrid, this dinner is only the “beginning of a larger vision, one that draws together the elements of healthy vegetarian (it’s actually always vegan) food, social justice, and community building.”  Her mission manifests in her dedication to contributing to the cause of eliminating hunger in Phoenix while serving local, unprocessed food (thus supporting local businesses to thrive) while inviting and including all members within the Phoenix community regardless of their status within the community, and eliminating waste in the food industry (according to the USDA, 30-40% of the food produced in the United States is wasted, which  equated to 131 billion pounds and $161 billion dollars of food in 2010). 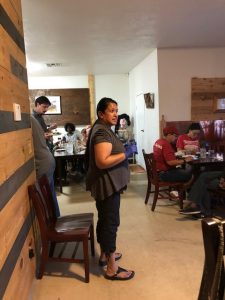 Every Monday evening, Ingrid, along with her husband, Daniel, and a plethora of volunteers (Jaine Amin Rao is the dedicated volunteer who told me about this weekly dinner and invited me that evening) gather to communally feed the group of people that arrive at 6:00pm.

In conjunction with the weekly Community Dinner, Ingrid offers a weekly prepared-to-go a la carte vegan pick-up service.  People register and then place their orders.  The menu changes weekly.  The items that are prepared for this meal-order service are what is served during that Monday’s Community Dinner.

RSVP’s are required for the dinner, and one can do so on their website.  That being said, however, on the evening I attended, 15 people had RSVP’d while 40 people showed up.  One of the couples that I sat with said that happens every week, so even though they are only two people, they always respond that six will be attending to help ensure that there will be plenty of food to go around.  No worries, though.  There was definitely no shortage of the organic, locally-produced, mouth-watering vegan food that evening.

Oh, the pay-as-you-can part – a can is put out in the dining room so that anyone can contribute whatever they can afford, whatever they think the dinner is worth, and/or a significant contribution to help defray the costs to feed the individuals who didn’t have the ability to contribute monetarily that evening.  What a beautiful way to anonymously do a small part to support the mission of aiding the cause of eliminating hunger by providing healthy, nutritious, delicious food to everyone.

The food was outstanding!  Restaurant quality with each item well seasoned and prepared. 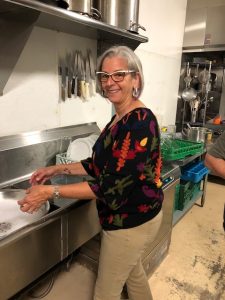 After a very delectable meal over quite enjoyable conversation, volunteers were requested to help clean up the dining room and the kitchen.  I high-tailed it into the kitchen and was immediately placed alongside the man rinsing the dishes.  I was in charge of stacking, running, and emptying the dishwasher, repeating that cycle at least fifteen times.  One of the bonuses I received as a result of doing this service was an amazing facial and eyeglass steam cleaning every time I opened up the dishwasher. 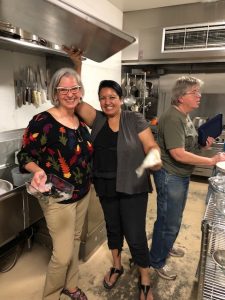 Having fun in the kitchen doing clean-up

The conversation continued to be lively, and we definitely made it fun rather than work.

All-in-all, the evening was approximately 2-1/2 hours of sheer and utter delight!  I have to tell you that anytime I find myself in the Phoenix area on a Monday night, I can absolutely assure you that I will be attending that dinner and lending a hand wherever I can.

Note:  One World Eats Founder, Denise Cerreta, was awarded the James Beard Humanitarian of the Year in 2017.  One World Everybody Eats is based in Idaho Falls, ID.   https://www.oneworldeverybodyeats.org/

Be sure to follow my weekly blog and the Veganification on Facebook to keep up with my vegan adventures in the moment!