Those of you who know me personally know that I read cookbooks as others might read novels or non-fiction.  I can’t help it.  I’m obsessed with reading cookbooks, especially well-written, well-illustrated vegans ones that tell some stories in between the recipes.

I get lost in them.  Sort of like a great book that draws me in as I become a part of the adventure, unaware of what is happening around me in my physical space.  I don’t hear anything else but the words jumping out of the page, directly aimed towards me.  It’s rather akin to Star Trek, when Captain Kirk would utter those infamous words, “Beam me up, Scotty”; and away I obligingly go. I soak it all in with sheer bliss.  I am transported, seemingly literally to me, in space and time.

So, I thought about today’s blog celebrating October being National Cookbook Month; and making it my homage to my favorite Vegan Cookbooks.  While I have a plethora vegan cookbooks on my shelf alongside some non-veg cookbooks where I find inspiration opportunities for veganification of non-veg recipes, the cookbooks in this list have dog-eared corners, droplets of stains from my culinary adventures while in use, and some handwritten notes in the corners.

Without a doubt, these have become my regularly perused and used (and all-time favorite) ones:

But, right from the start, you realize it is so much more than your ordinary cookbook, vegan or otherwise.  Many of the myriad of recipes are from actual fellow Main Street Academy Alumni. Scattered throughout the cookbook are tips and tricks from Victoria, J.L., and the sundry of the MSV Academy alumni recipe creators. However, before you even get to the recipe chapters, you are greeted by several chapters that debunk the vegan myths, explain multiple “shades” of how people define their vegan lifestyle, and a coaching corner.

What I like most about this cookbook is that the amazing recipes run the gamut of vegan cuisine, from quick and easy to recipes that may take some extra time but are definite show stoppers and readily approachable.  Readers will have the opportunity to recreate recipes that are not only 100% vegan but also accommodate personal choices, such as gluten-free and whole-food.

I have the sheer delight of having four of my very own original recipes included in the book (Divinely Decadent Chocolate Stout Cake, Chocolate Dipped Coconut Cookies, Hollandaise Sauce, and English Muffins). 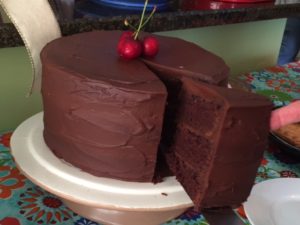 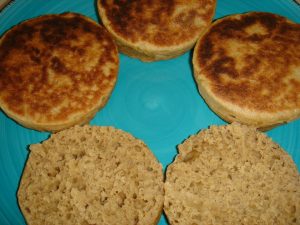 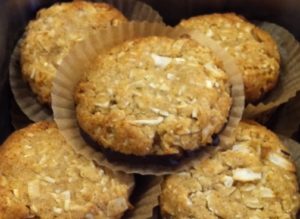 If you are of a certain age, you will definitely remember the ground-breaking cookbook that was destined to become the cultural icon that represented American cookery. First published in 1950, it has since had numerous reprints and updates. Larger in length and width than the typical cookbooks of that era and being hardbound and bright red, it definitely stood out.

Have you guessed it yet? If not, it’s the “Betty Crocker Cookbook”. Betty Goes Vegan, by Ann and Dan Shannon, was released in 2013 and became an overnight success.  The Shannon’s veganified the recipes that were in the Betty Crocker Cookbook.  This was no ordinary feat, to say the least!

Having grown up with a love for cooking, the Betty Crocker Cookbook was the first one I received as a gift as a young child.  I used it for many, many years; and it became one of tools that I used to learn the basics of cooking.  Remember, at that time there wasn’t any such channel as Food Network or the Cooking Channel.  But, of course, I did have Julia (as in Julia Child).

I’ve made many of the recipes included in the vegan Betty Goes Vegan, much to my delight.  It brings back childhood culinary memories each time I open this book, turn the page, and cook/bake one of the absolutely delicious recipes therein.

Vegan Chocolate – Unapologetically Luscious and Decadent Dairy-Free Desserts by Fran Costigan. The complete title truly says it all.  Her signature Sacher Torte is most incredibly impressive, presents so glamorously that it looks as if it took days and must have required incredible skill to produce.

Not only is it approachable because of Fran’s step-by-step instructions but it is also, without a doubt, one of the best chocolate desserts that will ever cross your lips.  If you are enamored with chocolate, this is a must-have on your shelf.

JL Fields is a brilliant cookbook author. She is a pioneer, teaching us how to use the latest kitchen appliances that will make vegan cooking, both for the newcomer and novice to the most experienced vegan home cook.  I truly learned how to operate both my air fryer and multi-function cookers because of two of her cookbooks, both of which should be in every vegan kitchen.

Her book, Vegan Pressure Cooking, was recently revised and updated.  For the home cook who wants to get into the kitchen, put together a nutritious and delicious vegan meal right-quick, this is the cookbook for you.  Once you get the hang of her recipes, you will feel like an InstantPot guru, ready to take the basics you’ve learned from her book and create your own meals.

JL Fields again knocked it out of the park with her next cookbook, The Vegan Air Fryer. If you’ve been following my blog, you know that I am not oil-averse.  However, that being said, I definitely don’t mind cutting back or eliminating extra calories, provided it doesn’t mean that I am compromising flavor (ah, here’s the food snob in me coming out).

Well, JL has taught me that one doesn’t have to necessarily be the ruination of the other.  Following her recipe for air fried French fries is an absolute revelation! Her kale and potato nuggets have become a go-to recipe for me.  Change up the potato and/or the vegetable creates an entirely different taste sensation.  Looking for a yummy dessert?  Try her Blueberry Apple Crumble.  What she does with soy curls will having you jumping for joy in your kitchen!

Before becoming vegan, I was a vegetarian who couldn’t imagine giving up my cheese. I literally ate cheese almost daily, sometimes more than once per day.  Life without cheese was inconceivable.  I also had no idea of the harm I was causing.  The moment I learned, my life was forever changed.  There was no way anything dairy was ever going to find its way to my plate ever again.

For years, I yearned for cheese.  Just the smell of a great sharp cheese would have my mouth watering, oftentimes with a drool or two making its way onto my face. But then I’d remember.  And there was no going back.  So, I longed.  When I came upon Skye Michael Conroy’s The Non-Dairy Evolution Cookbook, it was life-changing.

I no longer crave nor miss cheese because of the mentoring I received through this cookbook.  After playing with many of the recipes to my sheer and utter delight, I now create countless nut-based cheeses with some readily familiar flavors but also experiment with rather original and unexpected ingredients and/or flavors.

For instance, recently I veganified my Grandma Mary’s Italian Meatball recipe.  Being the first time I tried veganifying it, I converted the non-vegan ingredients in literal conversions to their vegan equivalents.  While the outcome was okay, they didn’t hit the mark.  I had just made a triple batch of the cultured Chevre cheese.  Using that as a base, flavor options have no limits.  Into the food processor went the meatballs until they were finely ground.  Folding them into some of the Chevre with some other herbs, and allowing it to culture for about a week, the results were truly outstanding.

I now make my own soy milk using the recipe included in this book.  Depending on what I intend to use it for, I vary the amount of water but will also add some spices, herbs, tea leaves to  provide flavor without any sweeteners.  The mayonnaise and raw cultured buttermilk have become staples in my kitchen.  Adding other ingredients create your own personal stamp to the recipe.

This cookbook has caused my creativity and experimentation in the kitchen to go out-of-bounds.  Truly a winner.

There You Have it!

So there you have it!  While I have and use many other vegan cookbooks, these are the ones that display their use proudly and confidently.

I’d love to hear what cookbook(s) are on your go-to shelf in your kitchen and why.

Wishing you joy and inspiration as you turn the pages on your next vegan cookbook.