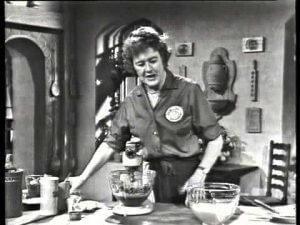 My Love Affair with A French Chef

My love for watching cooking shows started with my love affair with The French Chef (aka Julia Child) back in the early 1960’s.  I would race home to catch an episode on PBS at every opportunity.  I loved her juxtaposition of having mastered the French culinary techniques and her scientific approach to cooking alongside her being quite comfortable showing her humanness, as was more eloquently demonstrated in the episode where she was cooking a potato pancake.

When she went to flip the mass as she was explaining that you must do so with the “courage of your conviction”, much of the potatoes landed on the stove rather than back into the skillet.  Julia, in her skillful way, proceeded to pick them up, put them back in the skillet, pat it all back into a neat-looking pancake mass, and said “when you’re in the kitchen, who’s going to see”.

I LOVE JULIA! (*see my note at end of this post)  I actually own every single episode of The French Chef on DVD and watch them often. 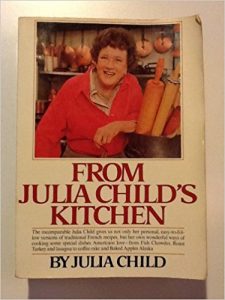 To this day, Julia remains my mentor in spirit.  In fact, when my son, Jason, was christened in 1982 (I consider myself today to be a recovering Catholic…sorry, hope I’ve not offended anyone.), Julia’s cookbook, From Julia Child’s Kitchen, had recently been released.  Since I was home for 6 weeks prior to Jason’s birth on maternity leave, I took that time to create a plethora of the recipes from that book which could be parked in the freezer and cooked/served at a later date.  When the date came for Jason’s event, I defrosted all of my creations, did the last minute prepping, and served this amazing (albeit not vegan) feast for approximately 20 guests which was most impressive.  It made me look like a culinary rock star!

There were other cooking shows sprouting up at the time as well.  There was Graham Kerr’s The Galloping Gourmet, which first aired in 1968.  His energy was a bit too frenetic for my liking; but he certainly had a sort of cult-like following. 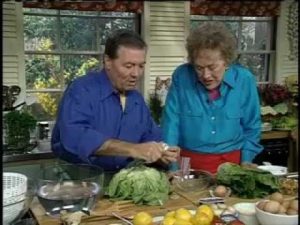 And while I still enjoy watching the elder Jacques Pepin cooking with his daughter, there was nothing like watching Julia and him on their joint venture, Julia and Jacques Cooking at Home.

I could sit for hours watching cooking show after cooking show, soaking up every skill, technique, and culinary term.  I was enthralled.

So, when TV Food Network launched in 1993, I was more than elated.  It became my ‘go-to’ channel.  It was pretty much only on in the evenings, as I recall.  Its offerings were slim, but so very exciting to watch, much to my then-now-ex-husband’s dismay (he was more of the Howard Stern genre). 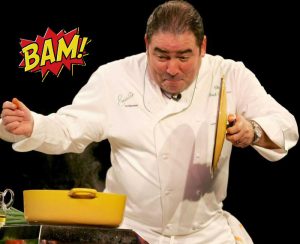 Of course, it launched Emeril Lagasse into celebrity chefdom (as is chef stardom).  Prior to Food Network, chefs did not enjoy the celebrity status that they do today.  I truly believe that it is precisely because of that channel that chefs are now as publicly recognizable as some actors and pro athletes. 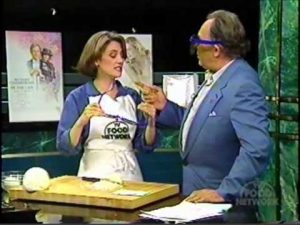 But I wonder how many of you might remember the show Talking Food, which starred Robin Leach (as in Lifestyles of the Rich and Famous) doing interviews with movie stars, etc.  In the kitchen, Kate Connelly (Killer Kate as Robin referred to her) was always cooking up something wonderful alongside an up-and-coming chef.  Sidenote, the first time Bobby Flay was on the show, you could see the sparks flying between them as they flirted their way through the show.  This is the show that not only launched Bobby Flay into the sharing of chefdom with Emeril but also culminated in Bobby and Kate marrying and having a child, but alas, the flame didn’t burn on forever.  Anyway, back to my love affair with culinary shows… 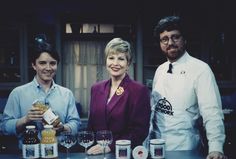 Another show that won my heart was Food, News, and Views show featuring David Rosengarten and Donna Hanover (at the time married to the then Mayor of New York City, Rudolph Guliani–another flame that didn’t burn on forever).  The format mirrored that of a television news show; and the hosts reviewed all things related to food that occurred during that day.  They would often have food critics and chefs on as well.

Believe it or not, they even had a vegetarian show featuring Curtis Aikens, called Pick Of The Day.

Today, I still love watching mostly any and all cooking shows.  Oftentimes, I find inspiration for my next recipe that I can veganify and make it my own.  I much prefer the shows that teach, showing techniques, rather than the cook-as-fast-as-you-can cooking competition shows. 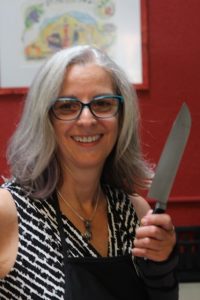 In fact, when I’m cooking at home, it’s not uncommon for me to pretend that I have my very own cooking show…I’ll talk and cook as if I’m in front of a camera.  It’s such fun.  Probably why I enjoy doing the Veganification Boutique Culinary Demonstrations.

With every recipe that I write and demo, I always ensure that the demo includes a culinary tip or technique so that everyone leaves not only having enjoyed eating delicious vegan food but they also leave having learned some new skills that they can/will hopefully incorporate into their culinary repertoire.

*If you are going to be in the Sedona Arizona area on Monday, June 4, join me at my Veganification Boutique Culinary Demonstration, An Homage to Julia Child, where amongst several other of Julia’s creations, we will be making my veganified version of her Boeuf Bourguignon, starting with actually making the ‘boeuf’.

You can reserve your spot below.
Registration is required.