What HAVE You Veggies Been Up To?

Last year, I was gifted with a volunteer pumpkin plant.  It produced several small, round, hearty, deeply-orange-fleshed pumpkins, much to my sheer delight.  They made their way to the expected pumpkin pie but also became pumpkin ice cream, pumpkin bread, and even Maizie enjoyed some pumpkin puree with her meals.

This year, in the spot where the pumpkin grew last year, my volunteers showed up in the form of spaghetti squash running amuck.  But, lo and behold, a very strange thing (at least to me) happened … I not only am feasting on lots of spaghetti squash but also these gracious guests, past and present, seem to have cross-pollinated and birthed a completely different vegetable.

This offspring has a shape sort of similar to a spaghetti squash with its exterior being a variegated blend of evergreen and pale yellow.  The inside is a whitish pale yellow, firm (sort of somewhere in between a zucchini and a butternut squash), and has the ever-so-slight appearance of having fibers; but unlike the spaghetti squash, they do not separate like spaghetti.

Well Now What? Tag! You’re It!

Ah, so what to do with the one harvested?  After peeling it and seeding it (I’ve read that you can roast the seeds as you would pumpkin seeds), I chopped it into Ľ” slices.  Being curious, I took a bite of the raw squash.  It was sweeter yet earthier than a pumpkin or a spaghetti squash, and certainly more tender.

After much deliberation, I decided to pull out my tagine, which hasn’t seen the light of day in far too long with my opting more standardly these days with the InstantPot and/or Air Fryer.  Time to go back to a basic kitchen appliance, if you will.

So, what is a tagine?  Although definitely far more recognized in Moroccan cuisine, it is a classically North African earthenware vessel.  It can be glazed or not.  Mine happens to be clear glazed inside with a colored glaze on the outside (ornamental).  Mine is oven safe as well as stovetop safe, provided you use a diffuser, which will help to disperse the heat more evenly and not directly onto the bottom of the clay vessel.  The bottom is shallow and circular while the top is a dome.  The dome is not only decorative but, in fact, has a critical role in the cooking process.

As your stew cooks, the steam will rise to the top of the dome as condensation, which will then run down the sides of the dome back into your stew, thus keeping whatever you are cooking moist and tender.  Low and slow is the key here.  Oh, and you need some moisture.

That being said, very much like paella, the tagine is typically started with some sort of starch at the bottom.  It could be rice, farro, quinoa. (It typically would not be couscous as the Moroccans have another brilliant method for cooking stews with couscous … it’s called a Couscoussier.  But then, that’s another blog.)  Your plant-based selections then go on top of the starch, liquid is added, and your tagine is ready for cooking.

I Shall Call Thee – Pumpketti!

For my pumpketti (what I have now officially named the offspring of my pumpkin and spaghetti squash), I decided that it deserved nothing short of being predominantly paired with other plants from the garden.

I used tri-colored quinoa as the tagine’s base (not from the garden) and then topped the quinoa with a mixture of very slightly sautéed pumpketti and onions.

My Thai basil is having its way with all the other herbs in the herb section of my garden, so it needed a pruning.  Ah, perfect! A basil-based sauce it was.  Into the blender when more than two handfuls of the Thai basil with some scallions, a jalapeno, chickenless broth, and fresh ground black pepper.  I poured that over the top of my garden’s bounty of pumpketti and onions.  Since it was rather thick, I added in about 1-1/2 cups of water so that quinoa would have some added liquid to cook thoroughly. 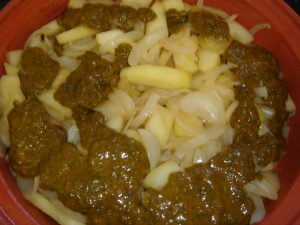 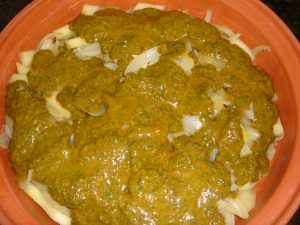 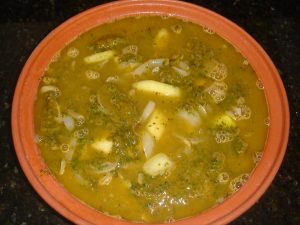 Liquid In – Ready to go into oven

Into a cold 350° Fahrenheit oven (this is an important point as you don’t want to crack your beautiful tagine) it went for 1-1/2 hours.  The fragrance permeating the kitchen was enticing.  I waited with much anticipation for my first taste of pumpketti tagine.

Fresh out of the oven

Well, I wasn’t disappointed.  The tagine was bubbling with delight when it was removed from the oven.

The quinoa was perfectly tender with its tails exposing themselves.  The pumpketti, gently flavored with the garden onions and basil, was richly succulent, sweet, and silkenly firm.

A success!  I’ve counted six more pumpketti growing amidst more than a dozen of spaghetti squash.  I’m already starting to plan what will become of them when harvested!

Be sure to follow my Veganification blog and check back weekly for my newest Vegan Adventure!