Recently, my partner Richard and I had the exquisite joy of traipsing about Key West for a glorious nine days of fun and sun (and eating).

In between, amongst other things, snorkeling, lots of walking about coupled with some entertaining people watching, we visited some interesting places—such as President Truman’s Little White House (still in operation today as well as a wonderful touring home), 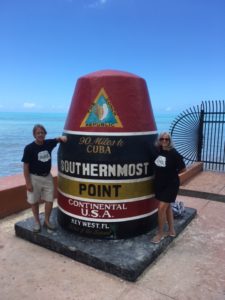 the Southern Most Point of the Continental United States, 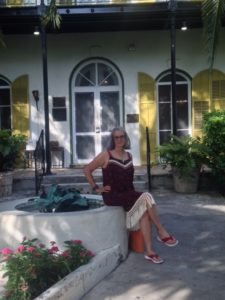 Me at Hemingway House

and of course (being the feline lover that I am), the Hemingway House. 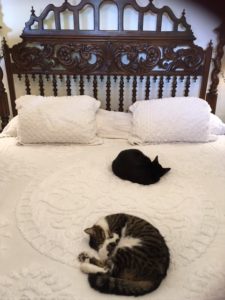 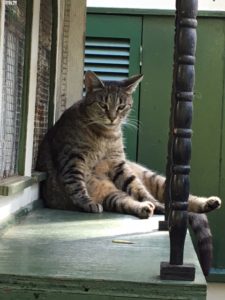 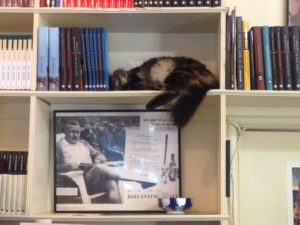 Being the foodie brat that I can oftentimes be, I indubitably did my restaurant research before heading out of Dodge (which for us, is the Sedona area).

The restaurant that immediately came up in all my searches for vegan food was The Café, which bills themselves as “a mostly vegetarian restaurant”. We were not disappointed. Our first dinner was eaten there. I have a confession to make here—there are no pictures to show you of this delightful meal because we just simply dove in with reckless abandon before we realized that we had forgotten to memorialize our plates beforehand. Our apologies. But, it was really just that good! Which, for those of you that know the food snob that I can be, one of my biggest complaints about far too many veg restaurants that I’ve eaten at is that the food is far too often mediocre at best. Not at The Café. We ate three meals there, including dinners and breakfast, never to be disappointed, each time ordering different items off their menu and then sharing all. But, on the first evening, I ordered a slice of their vegan coconut cake. Now, if you’ve been following my blog, you know that I did a five-part series on my homemade Limoncello Coconut Cake, ( http://veganification.com/index.php/2016/11/11/limoncello-coconut-cake-series-part-1-the-limoncello )  which if I can say so myself, is probably one of the best recipes I’ve ever written. Well, their coconut cake was a very close (and I do mean, very close) second to mine. So much so that, thereafter, I ended every night in Key West with another slice. Oh yes, it was just that stellar!

The reason for this trip to be taken the week that we embarked was because Richard’s birthday was three days after our arrival. And it was no ordinary birthday, this was the one that marked his eligibility into the Medicare system; so that meant it had to be celebrated with a real bang (exclamation point included)!

Task at hand was to find a restaurant that would be top-shelf, romantic, and accommodating to my vegan diet. Eureka! I found it! 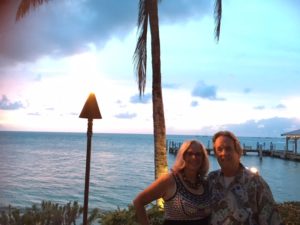 Latitude’s Restaurant was named the #1 Best Overall Restaurant in Key West by OpenTable in 2016, and one of the 100 Most Romantic Restaurants in America for 2017. It is nestled on coast of Sunset Key, embracing the Gulf of Mexico with luxurious views. To get to this petite 27-acre idyllic island is the beginning of the extraordinary evening—you are transported by boat, then greeted by a long walking pier onto the island. The romance, already intact, for sure! 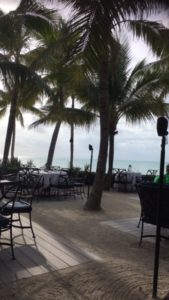 We floated to our table, which was outside on a patio with the beach sand at the edge. Torches lit the short walk to edge of the Gulf, amidst tall and languid palm trees.

While their menu, at a glance, was not at all vegan-friendly, they were more than happy to accommodate me with some off-the-menu items. They seemed well versed in preparing vegan food; and after a lively Q&A of my taste/ingredient preferences, I simply replied with, “Surprise me”. 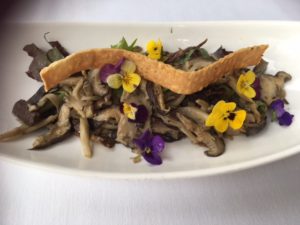 My meal began with their wild mushroom salad, which required no modifications. It was gently bathed in a citrus dressing and truffle oil, and adorned with a ruffled slice of lavash, a thin Middle Eastern flatbread. To say this delightfully awakened my palate is an understatement! It was a mushroom-lover’s heaven on earth. Oh, I can’t forget to mention the edible pansies. 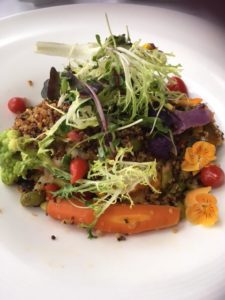 Their entrée selection was quinoa and vegetables. No, this wasn’t any ordinary quinoa and vegetables. First of all, it was decidedly plated, with each ingredient thoughtfully placed for presentation. I think there might have even been a slight amount of drool escaping my mouth before I reached for my fork (geez, I sort of hope not, but just saying, it looked that good). Edible flowers added that final touch. The plate had amazing contrast—warm, flavorful quinoa; roasted carrots; cool, crispy mizuna lettuce, steamed al-dente green and purple cauliflower, baby roasted Brussel sprouts; what appeared to be Reggae Roma tomatoes, still raw yet with a touch of warmth; and the viola flowers. 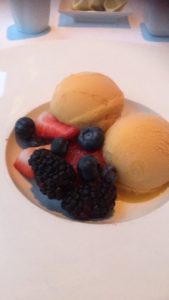 We meandered about the island for a while before returning back to Key West. It was truly one of those miraculously memorable evenings that we will reminisce about for years to come.

More to come: Next week – Hits and Misses 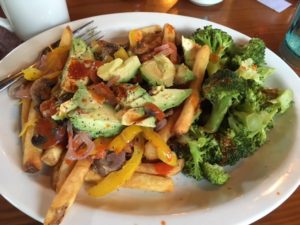