Today, I take a diversion from my typical blog post.  It’s a rather auspicious day.  Today marks my 100th Veganification blog post!

So, instead of talking about food, which I always seem to do, I’m going to shift gears a bit today.  As I sat here contemplating what to write about, I kept coming back to how much I have to be grateful for and about.  I’ve been doing quite a bit of ‘taking stock’ recently, which resulted in making some significant decisions regarding how I will be allocating my time in 2018.  I was able to let go of some tasks which truly no longer serve but I had been continuing more out of a sense of obligation (and probably some ego involved in there as well).  All good!

But, it also brought the acknowledgment that there are many things in my life that do serve and that I hold dear in my heart.  People, places, things…and also the two cats with whom I have the pleasure to reside.  The two girls are Tasha and Maizie. 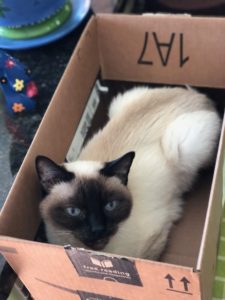 Tasha is a chocolate-point apple-head Siamese who came to me two days prior to Thanksgiving in 2013.  At the time, it was estimated that Tasha was at least ten years old.  She was surrendered to a shelter in Camden County, New Jersey (not a very nice place, to say the least), along with her litter-mate brother, Torbie, about three weeks earlier after their companion human passed away.  Torbie never made it out of the shelter.  Tasha almost didn’t either; but ultimately, she came home with me.  Long story for another day, but the important thing is that she came home.  She was ill, quite ill.  Neither the vet nor I were certain she would pull through.  With the help of a dear friend, Carol Githens, and several surgeries, Tasha thrived. 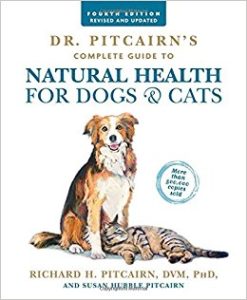 About 1-1/2 years ago, she was diagnosed with renal disease.  But, Tasha is not to be deterred.  She loves her life.  I have been blessed with yet two other most incredible friends, the co-authors of the book, Dr. Pitcairn’s Complete Guide to Natural Health for Dogs & Cats, now in its fourth edition, by Richard H. Pitcairn, DVM, PhD and Susan Hubble Pitcairn.  Together, they introduced me to the homeopathic veterinarian that we work with, Marybeth Mintner, DVM.  I have become quite proficient at administering sub-cutaneous fluids every other day to Tasha.  That, coupled with Dr. Mintner’s homeopathic remedy suggestions, have stabilized Tasha.  Tasha has been known to be found sleeping on my face (yes, literally) during the night.  I’d have it no other way. 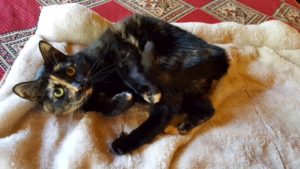 And, then there’s Maizie, who is an elegantly sleek Tortie with amazing rust colors running through her glistening black hair.  When I moved to the Sedona/Verde Valley area slightly over two years ago, I began doing socialization volunteer work at a local animal shelter.  My role was to go there weekly on Sundays and take the cats out of their cages, one at a time, bring them to the socialization room, and interact with them.

When I started, Maizie was already in residence, having been through quite a tramatic prior 5 months (at least, that’s all the time that the shelter had knowledge of).  Maizie arrived in the yard of a local here in town.  While very scared and skiddish, she clearly was not a feral cat.  It took this woman about four months to finally be able to bring Maizie into her home.  Maizie was not well received by the other resident cat, who repeatedly attacked Maizie.  After one month of this, the woman surrendered Maize to the shelter.  She was so scared that she spent her time hiding under her flipped-over bed.  When I would try to take her out of the cage to socialize with her, she would cling to the metal wrongs.  I persisted each time.   This went on for four months, until two days after Christmas two years ago, when I went to the shelter on a weekday.  Something told me not to wait until the weekend.  I asked how Maizie was doing, and was told that they were going to send her to the ‘barn’ by the end of the week if she was not fostered/adopted.  The ‘barn’ is a where they send cats who are deemed feral and/or unadoptable as they are a no-kill shelter.  It’s an outdoor life literally with a barn that they can go into for shelter.  However, there’s quite a few cats there.  I had them draw up the papers immediately and home with me came Maizie.

It’s been a long two years for Maizie learning how to trust and not be scared.  To her absolute credit, she has really settled in, especially the last months.  She even sleeps with us now and frequently will come up and lay upon Richard’s chest when we are relaxing on the couch.  She’s come so far.

So, I have so much to be grateful for.  Two girls who bring so much love in our home.  Their presence is everywhere; and they bring us so much joy.

You will often hear me say that I wonder, “who rescued who?”