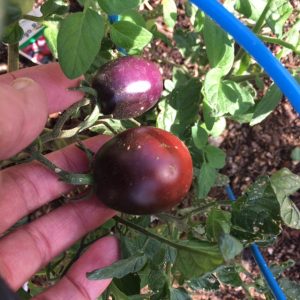 Last year, Richard and I built a raised bed garden structure out of pecky cedar. We choose that wood because it is untreated, and thus, was in alignment with our desire to have an organic garden. We built it ourselves and had some much fun in the process.

There are 36 3-foot rebar, some inside and others on the outside of the lumber, holding the structure together. Six ton of what was supposed to be organic garden soil was delivered and dumped into the raised bed, whose inside measures 8’x16’. We had irrigation lines put in to ensure adequate and consistent watering, even when we would be out-of-town.

Now, I’m sort of getting ahead of myself here. I should tell you that I am a Jersey Girl, born, raised, and lived the vast majority of my life approximately 12-20 miles outside of Manhattan. Richard, on the other hand, is from Washington State. And here we are now in Northern Arizona, where the climate is dry, the air is hotter, and there are pretty much two growing seasons. Geez, were we (and still are) on a huge gardening learning curve.To our utter dismay, the soil was not what we had hoped for. It was not a rich soil and failed to provide a thriving environment for our plants. Our garden was pretty much a bust last year.

But, we were not to be deterred nor defeated! We spent the winter tending to the soil (well, in the spirit of full disclosure and integrity, probably 98% of the effort was put forth by Richard), adding compost, turning it, adding coffee grinds, adding worms that a friend of ours gifted us with, etc., etc.

So, one of the things that we learned in this process was that not all organic soils are vegan as many, if not most, contain some sort of manure. But alas, our worm friend, Susan, told us about one product that she found that is both organic and vegan. Viola!

As the New Year rolled around and our garden soil was starting to become more inviting, Richard and I began pondering what we were going to plant in our coveted garden real estate. 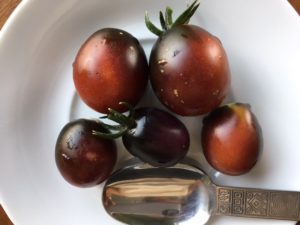 We came upon this absolutely beautiful gem of a tomato, somewhere in size between a cherry tomato and a plum tomato. It’s called an Indigo Ruby Tomato. From a small plant lovingly inserted into our soil, its harvest began less than two months thereafter.

We’ve already begun feasting upon this amazing fruit. One of the joys is watching these tomatoes mature. They start out hard and green as you would expect a tomato to be. But then, it blossoms into this incredibly dark purple, nearing black tomato. It’s positively beautiful, but alas, not yet ripe!

Suddenly, the bottom of the tomato begins to lighten up, changing to a brilliant orange, and with it, the softening of the tomato. The tomato is ready to be enjoyed! 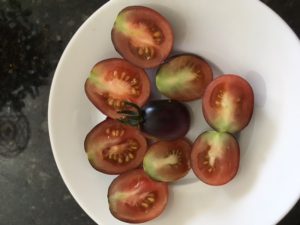 So far, none have made it to the dinner table. They mostly get eaten directly off the vine. The burst of rich sweetness from the sun-kissed flesh titillates all my senses. It is definitely a tomato worthy of standing up on its own without any accoutrements except possibly a light sprinkling of sea salt.

We planted a lime tree and a lemon tree. And, to our absolute joy, we just harvested 51 peaches off our dwarf peach tree that we planted 2 seasons ago. Yum! That doesn’t include the 30 plus peaches that the Javelina feasted upon 2 days ago. He broke through the fence that we had around the tree. While he was at it, he ate some of the zucchini and tomatoes. Dang bugger! Oh well, one of the joys of living in the high desert and not in a suburb or city.

I am hoping to learn a new skill this year with the anticipation of a bounty of plum tomatoes— canning. Stay tuned!