Every now and again, I am ‘wowed’ by a veg restaurant. Those of you who know me, know that I am far too often disappointed by the mediocre-at-best food that is served at veg restaurants outside the big city haunts.

So, when I went back East for my holiday visit, one would not be complete without seeing my beloved friends, Janet, Sue, and Rati. Since I was staying just outside of Manhattan at a hotel near the Meadowlands, where, if Urban legend has it correct, Teamster mob boss Jimmy Hoffa is buried—(yup, Jersey Girl here reminiscing), we decided to head into revitalized Jersey City for dinner. Janet came up with this small, neighborhood bar and vegetarian eatery called “The Pet Shop”. None of us had ever even heard of the place, but after perusing their website, we decided to give it a try.

Walking in, the place with dimly lit and quite a-buzz. Hip looking, moderately tattooed 20-30-something men and women filled the bar area. Tucked in the back was this, if the place were not crowded, quaint, decidedly trendy chic room which was lined with booths on one side, round wood tables with your typical wood chairs on the opposite side, long high tables with bar stools in the center, and a sitting area with a loveseat sandwiched between two end tables with lamps and a coffee table at the very back of the room. 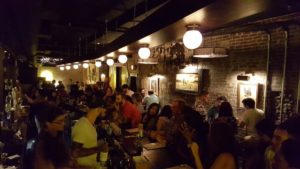 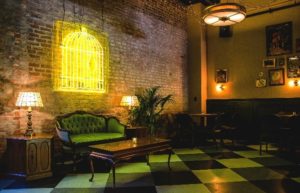 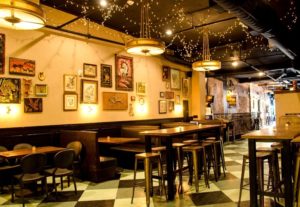 There’s also one of the Take-Your-Own-Photo Booths straight off the Boardwalk from down the shore. Oh, if you’re from Jersey, no matter where, you always go ‘down the shore’, not ‘to the ocean’, not ‘up the shore’ if you live south of the shore.

I immediately felt ‘at home’ there. We nestled into a booth in the back room and started with ordering our drinks and appetizers.

Lindsay, Mitch and the Team

The staff is attentive and available yet give you the space to feel as if you are having your own private party. The Sommelier/Managing Partner, Lindsay Gomeringer, introduced herself. She very much fit right in with the ambiance she’s creating. While she said the intent was a local, neighborhood bar, which it definitely is, she has also surpassed that expectation by delivering a creative menu to pair with the spirited drinks.

Our server, Mitch, was able to answer every one, yes every one, of our questions with ease. He was well versed on all the drinks and every menu item. He represented The Pet Shop very well and enhanced our wonderful evening.

In addition to a nice list of beers and wines, they had several “House Classic” drinks that were rather creative, such as Soldier’s fix (Sailor Jerry Spiced Rum, Falernum, honey, pineapple, lie, orange bitters) and Keep The Doctor Away (NY Applejack, Misunderstood Ginger Whiskey, lemon mint agave, hard cider). Sue decided on the Soldier’s Fix while Rati and I went with our less-imaginative yet equally delicious glass of Bordeaux wine.  Janet went with a non-alcoholic beverage.

The menu contains appetizers, salads, and sandwiches; but there is truly something for everyone.

We decided to go with the mélange of appetizers for all of us to share (unfortunately, we were so hungry and everything looked so good that it wasn’t until we had devoured it all that we realized I hadn’t remembered to take any photos):
• Fried Brussels Sprouts: Now, I love these baby-like cabbages; but I have to say….YUM , NOM, NOM!!! They were packed with flavor from the smoked paprika and fresh rosemary, then mixed with candied pecans. The vegan ranch dressing was almost not even necessary they were that good as a stand-alone….but heck, how often do you get great vegan ranch dressing! I could have drank the stuff!
• Mushroom Meatball Bamboo Picks: Reminded me of the throwback to the sixties and seventies with the Swedish Meatballs, but these were nothing like those days-of-old oddities. These meatballs didn’t fall apart when you bit into them. They had a wonderful meatball chew to them and very much reminded me of the meatballs my Italian Great-Grandmother Felicita used to fry over the hot stove every Sunday.
• Buffalo Cauliflower: Doesn’t every veg bar need to have its own version of this app? Seems to be so. Brilliantly done! Flavorful, crispy outside, al dente but cooked inside. Amazing buffalo sauce with just the right amount of kick to know you’ve been kicked but not looking for the mouth bath of vegan yogurt to drown out the fire.
• French Fries: I know, not very creative; but definitely delightful. They were served with a seasoned ketchup which sent them over the top.
• Olive Bowl: A potpourri of olives in olive oil with lemon and orange rind and pepperoncini (crushed red pepper).

Although we really put a huge dent into our appetites with the appetizers, we decided we weren’t going to share our entrees. While their salads were appealing, we were all on the ‘fried food’ wagon and went the sandwich route.

Even though we had the mushroom meatballs as a shared appetizer, Rati was so enthralled with them that she went for the sandwich option, which came served in a Portuguese role with a house-made mayo, pickled onions, and shaved carrots. It was topped with a mushroom gravy rather than the appetizer tomato confit enrobement.

Sue went with the Portobello burger, which came in a brioche bun with a balsamic roasted red bell pepper vinegar sauce. Another winner.

Okay, so cauliflower. I have been known to complain about the fact that cauliflower seems to be the Portobello mushroom of the 2010’s….but…here’s the description of The Pet Shop’s Cauliflower Steak Sandwich straight off the menu, “Deep fried cauliflower Milanese steak, with pesto spread, capers, and artichokes topped with roasted bell peppers and a sprinkle of Parmesan cheese (I had it sans the cheese as they don’t have any vegan cheese, which I am perfectly okay with going naked) on a toasted ciabatta roll. (Have you noticed that every sandwich was paired with a different roll to be the perfect accoutrement to the sandwich?) With that description, how could I not? Janet and I decided this was our sandwich. And we were not to be disappointed.

How to go in for the sandwich? …well, I had to do a Guy Fieri, roll up the sleeves, unlock the jaw, open wide, and just dive in, fully expecting to be wearing some of the sandwich on some other part in addition to my mouth.

All sandwiches come with, yes, you guessed it, more French fries! Okay, so definitely not the healthiest of meals, I will admit. But, I also have to admit, definitely one of the tastiest veg meals I’ve had out at a restaurant in a long time.

Info for Next Time

In warmer weather, they even have an outdoor seating area. And oh, Tuesday night is Taqueria Tuesday, when they offer tacos, burrito, and quesadillas.

If you are in North Jersey / Manhattan area, this is one place you won’t want to miss. Plan on making it an evening of conviviality, a couple of drinks (Designated driver, please; or heck, it’s Jersey City, use mass transit), and some great eats!

Be sure to follow my blog for my restaurant reviews.