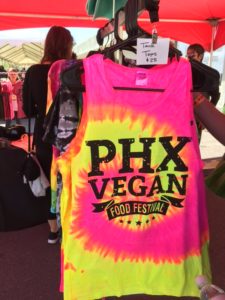 Saturday, February 25, started out with a bit of crispness in the air with the sun shining. A beautiful day for a vegan food festival, most of which was outdoors.

The location was the Phoenix Theater, an absolutely perfect place for the festival. 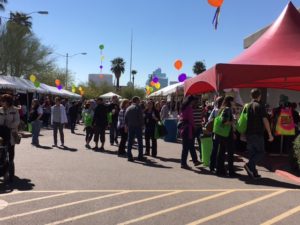 I arrived for the VIP opening, excited for the day to begin. I was greeted by the friendly staff, who handed me my Swag bag, which included some valuable coupons from Daiya Foods and Tofurky, along with many others. Samples included Follow Your Heart’s Vegan Egg, and bars from several companys, such as Raw Revolution Organic Bars, Go Macro Bars, and Kind Bars. Sir Kensington’s even included a small bottle of ketchup.

I had my plan of attack laid out….first, check out all the vendors; and second, get into the auditorium where the speakers would be early so I could get a center seat towards the front of the room (yes, I am one of those people who like to sit in the front of the classroom 🙂 .

Upon perusing the vendors, I have to admit that my wallet was also a frequent visitor. Thankfully, I had my swag bag to assist as storage compartment for my acquisitions as I meandered through the vendor aisles. So many wonderful items to choose from, from conscious clothing and accessories to the most mouth-watering vegan food. One of my favorite scores was from Grape Cat Vegan Clothing and Accessories, a matching wallet and coin purse, which are richly-colored in a dark fuchsia with a black cat on them. The wallet even came with a shoulder strap, so it could double as a purse. Oh, and vegan, of course! I really did damage at the stand, also purchasing two birthday presents for loved ones. But, shhhh! Please don’t tell, they are a surprise. 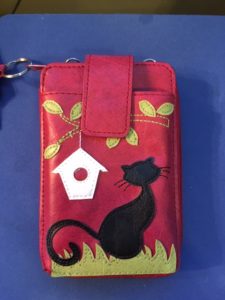 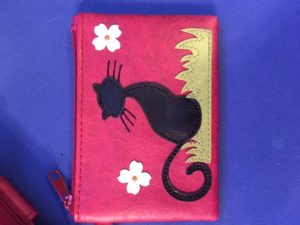 I adore anything Picasso, and at Davisson Studio, I scored a serving tray that I will use this upcoming Monday during my cooking demonstration. Isn’t is lovely?! 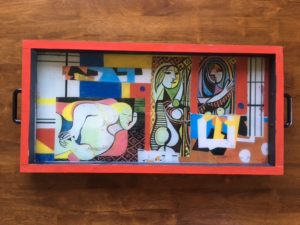 Ah, the food! It was absolutely everywhere…from nestled between the non-food vendors to an entire row of nothing but vegan food trucks! It was a vegan’s sensory overload with fragrant aromas coming from every nook and cranny. The list is far too long to include here; but suffice to say that it included area favs such as, 24 Carrots, Café Lalibela, Green New American Vegetarian, Pomegrante Café, Udupi Café. Food Truck Row, as I like to refer to it, included Affogato Truck, Loca Popa, Mustache Pretzrels, Pho King Kitchen, Mi Vegana Madre, to name a few. Oh my! Throughout the day, there were lines at all the stands and trucks, and rightfully so, for sure.

Knowing that I couldn’t eat my way through the festival (it would have been nice to do so; but I knew I wanted to hear the speakers, so off I went to the auditorium).

The speakers opened with Chef Madelyn Pryor, from The Vegan Taste. In addition to her amazing cooking prowess, she has an astounding sense of humor. What a delight! She prepared two raw blender soups that were flavorful, quick, and easy. When she realized she had forgotten the top to her VitaMix, she didn’t skip a beat. She grabbed a paper plate, and improvised. 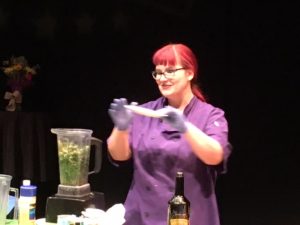 Will Tucker, vegan body builder, owner of Will Tucker Fitness (WTF!) and contributor to Vegan Health & Fitness Magazine was electric. He talked about how his shifting to a plant-based, mostly fruit, diet transformed his professional body building competing into a winning run. 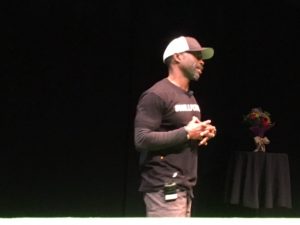 Jason Wyrick, from the Vegan Taste, was up next. What can I say about our local vegan chef hero! He is the author of two wonderful cookbooks (Vegan Tacos: Authentic and Inspired Recipes for Mexico’s Favorite Street Food and Vegan Mexico: Soul-Satisfying Regional Recipes from Tamales to Tostadas).   But more importantly, he tells his personal story of triumph from a life-threatening diagnosis to wellness as a result of shifting to a healthy, plant-based diet. For me personally, I LOVE, yes LOVE, his recipes! One of my biggest gripes with most vegan restaurants is their lack of seasonings, thus resulting in boring, bland food that I find rather unappealing. Not with Jason’s recipes! He is neither shy nor bashful about how he heightens and enhances the flavor profile of his creations. Brilliant is definitely an understatement. If you haven’t checked out his website or his cookbooks, you absolutely must! 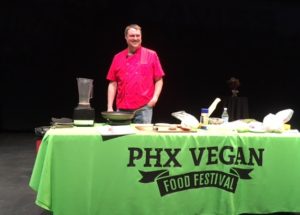 So, several years ago I remember hearing about this young woman who was traipsing around the U.S. in a van in search of the quintessential meal at vegan restaurants. I remember thinking how much I envied her gumption, first of all, to even think about, then embark on such a journey. Then, being the food brat that I am, how I wished I could have the courage to leave my everyday life behind in search of vegan meals. I couldn’t wait to hear her speak. Her name — Kristin Lajeunesse. Her blog that chronicled her two-year expedition – Will Travel for Vegan Food. Her story was inspiring, not only because of her actually pulling it off but also because of her effervescent tenacity and down-to-earth approach to life. It was a real treat hearing her story. 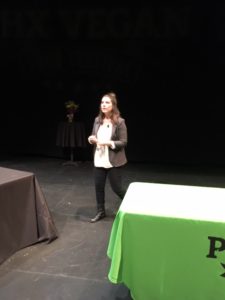 Last, but certain not least, was Tess Challis, author, wellness coach, and vegan chef. She prepared a caramel corn that was easy, healthful, and would satisfy all urges for a sweet treat. 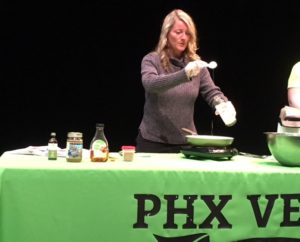 It was a full and glorious day of community, conversation, impulse purchases, great food, amazing speakers, and music.  Oh, I seem to have forgotten to tell you that live music abounded everywhere.  Outdoors, there were three different music venues. 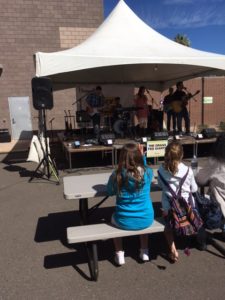 I am already looking forward to my next Vegan Food Festival, wherever it takes me.