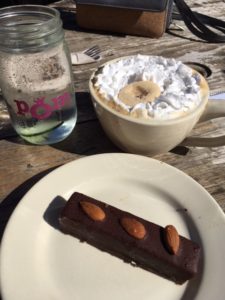 I had the opportunity to pop into Pomegranate Café last week for brunch. I’ve eaten there many times, and was especially excited that morning because I had a plan. I was starting my meal with a dessert as my appetizer as I wanted to make sure there was room in my belly for their oh-so-delightful raw chocolate almond joy with an almond buttercup latte as a chaser, made with espresso, vanilla-almond syrup, POMilk, coconut whip, and cinnamon. Could there be any better way to start brunch? I think not. I was in dessert/appetizer heaven!

I have to tell you that their version of almond joy far exceeds any I’ve ever had. It positively delectable! But, a note of warning—if you plan on taking one to-go, make sure you have a cooler pack with ice. I made the mistake once of not doing so, carrying it out in its cardboard container. Mistake. When I got home and opened it up to partake, it had completely melted into a puddle of goo. Not appealing. Soo very disappointing. 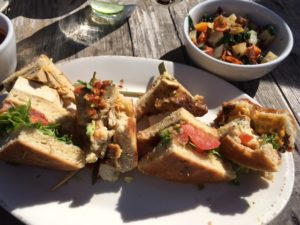 For my brunch entrée, I decided on having The Breakfast Club, vegan option, which came on a rather thick and dense English Muffin that was cut into three slices, as it traditional for a club sandwich. It truly was a triple decker, so I had to employ my Guy Fieri sandwich-eating strategy…..

How to Eat a Triple Decker Sandwich Without Wearing It

But, to be honest, the sandwich itself was quite bland, to the extent that I wound up asking for a cup of their enchilada sauce so I could dunk the sandwich into it for some flavor. That was disappointing, especially after it sounded so yummy on the menu.

Overall, I love the fact that Pomegranate serves organic, locally-sourced food that is vegan first. They do have several items wherein you can request a vegetarian option.

I have never been disappointed with any of their desserts, not ever. They have quite a varied menu, so there’s something for everyone there.

Pomegranate Café is located at 4025 East Chandler Boulevard, #28, Phoenix, AZ 85048. Check out their café and full menu at http://www.pomegranatecafe.com/ .