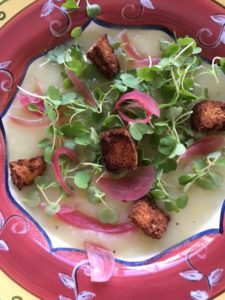 As the sun sets here in the Sedona area, the crisp air settles in.  Perfect time for a warm bowl of soup.

I love how the fragrant aroma permeates the kitchen when a pot of soup is on the stove.  It’s comforting.  It’s home.  It’s the anticipation of dinner.

I went to the farmer’s market.  The plethora of autumn harvest vegetables had me spellbound. As I perused the bounty, I saw It!  There it was! My inspiration for tonight’s dinner!A leek that was about 2” in diameter and approximately 15” long.  It was calling out to me “Potato Leek Soup”.   No, “Leek Potato Soup”.  Okay, Okay.  I’m sold.

Now, as far as soups go, it truly doesn’t get any easier than this particular soup.

Into my dutch oven went a scant amount of olive oil with five minced garlic cloves on medium heat.

While the garlic was becoming fragrant, I started with cutting off the tougher top section of the leek, washing it, and bagging it in preparation for its destination–the freezer.  Perfect addition for stock.  Next, leaving the root core at the bottom intact, I put four lengthwise slits in the leek, which enabled me to run it under cold water to release any dirt that might be within its long, bundled sheaths.  To my delight, it was astoundingly clean.

It made its way to the cutting board, where I chopped it into small dices, then into the pot it went, along with 4 medium potatoes that I peeled and chopped.  I poured vegan chicken broth into the pool to cover the veggies plus about an inch above.  Brought that to a boil, then reduced to simmer for about 20 minutes.

When it was done, I let it cool slightly before the immersion blender did its duty.  I like a thick creamy soup that has texture, so I didn’t take it all the way to complete puree.

If you really want to up the ante, you can add a small amount of vegan cream or yogurt at this point for an additional silky luxuriousness.

To serve, I made a couple of garnishes.

First was croutons.  I took two slices of sprouted whole grain bread, gave them a quick spritz of olive oil, sprinkled sea salt, crushed black pepper, and garlic powder on them before slicing them into cubes and air frying them for 6 minutes at 360 degrees Fahrenheit, shaking twice in the process.  Perfectly toasted croutons.

Next was a quick pickled red onion.  Into a small saucepan, I added approximately 2 tablespoons of apple cider vinegar, approximately 2 tablespoons water, approximately 2 teaspoons sugar, 1 teaspoon sea salt, and brought up the heat just enough to dissolve everything.  I immediately took it off the heat and dropped in a thinly sliced red onion.  Let that sit for 15 minutes, and you have the perfectly pickled onions.  To serve, drain the pickling liquid; however, to store the remaining onions, keep them in the liquid.

The final garnish was a mixture of micro arugula and cilantro.

Oh, and leftovers become the rather decadent  French vichyssoise, aka, cold potato soup.  But my plan for tomorrow night is to roast a bunch of mushrooms and add it to the soup for a flavor and textural contrast.