Reasons to Make the Change to Vegan Living in 2019!

I have been a vegan for a very long time. I try to encourage others every day to live a cruelty-free life and consume only plant based nutrition. Doing so can help with a number of physical issues many in America and around the world suffer from. Eating clean has been known to cure terrible cases of acne, alleviate bad breath, helps with asthma and lessens overall lethargy.

I decided to share with you some of the popular items usually consumed by non-vegans and give examples of why these substances need to be eliminated or drastically reduced from everyone’s diet. I would love to see a world full of vegans, even if it means veganifying just one person a day.

I am of the belief that giving up all flesh foods is highly beneficial to the human body, and let’s be honest, animal cruelty sucks. Fruits and raw vegetables contain ascorbic properties that prevent various diseases. Meat, however, may be affected by such dreaded diseases as intestinal worms etc. Worms. Gross.

Many medical doctors forbid their patients to eat meat to alleviate gout rheumatism. The Russian Dr. Buteyko advises all asthmatics to abstain from ALL animal products and processed foods. This discipline has helped many an asthmatic to give up ventolin. Meats are in a decomposing state, producing a host of poisons, uric acid and mucus in the body. Again, gross.

Meat as food is unbalanced and contains a great excess of protein while almost completely lacking in calcium and growth promoting vitamins and minerals. Experiments reported by Farger and Walepole in the journal of Physiology and Pathology show that putrefied meat contains many toxic substances, some of which cause the blood pressure to rise which is why physicians forbid it to patients suffering from high blood pressure.

The milk of any animal is basically too rich for humans. It is highly acidic and mucus forming. The fact that man needs to drink the milk of another creature after it has been weaned of his own mother is actually laughable and propaganda hyped by its endorsers basically for their gain.

Being a predigested food, it has been shown to cause various complications in the stomach and colon, such as cramps and convulsions. Its calcium is highly difficult to assimilate. This results in its introduction in free form into the blood stream and an eventual deposition in the tissues, cells and joints where it may cause intense pain and suffering. Milk is loaded with antibiotics, bacteria, pesticides, cholesterol and powerful growth hormones that are deeply troubling to the human body.

Contrary to the hype, drinking milk will not prevent osteoporosis. In 1995, the Harvard Nurses’ Health Study conducted on over 75, 000 women revealed that those supposedly acquiring calcium from milk experience more fractures compared to those drinking little or no milk.

Animal milk is for the animal’s offspring and not you. Think about it. That being said, it is advisable to eliminate milk and all dairy from the diet for optimal health.

This over-promoted, overpriced product being sold to gullible health faddists should be eliminated from your diet. It is meant only for the bees that make it.
Being predigested it enters the bloodstream rapidly raising the blood sugar way above normal. To correct this, the pancreas must produce insulin or death may occur.
Replace honey with genuine maple syrup for a much more balanced and safer, sweetener. 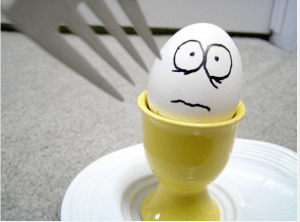 Even worse than meats. Research has shown they are very constipating and its white is dangerous, acid forming and too high in protein qualities.

I’ve heard many people proudly declare “I don’t do red meat just fish and poultry!” However, they are very mistaken in that; although for the reasons given above-meat is highly detrimental for consumption, Fish is even worse. It putrefies much quicker than meat. If you cut a piece of fish and meat side by side, you’ll notice that the former decays much quicker than the latter. Imagine what it’s like on the inside of the body. Moreover, taking into consideration the heavy metal contamination that fish contains-based on the pollution of their habitat, Fish is an especially bad choice, so do yourself a favor, avoid fish at all times if you can!

Though some non-vegans show bodily vigor, they usually do not possess the same endurance and strength. A great example would be Bill Pearl, five-time winner of the Mr. Universe pageant. Even our distant cousins, the Apes in the wild, are vegetarians as well.

After reading these factors, if you are still on the fence on how safe and healthy being a vegan can be for your health-or if you need to be convinced of its benefits-do not worry, living a cruelty-free life is definitely the biggest step you can take towards improving your health and I have tons of great articles and recipes for your reference. I encourage you to reach out and we can talk more about helping you make the vegan transition. Sign up for a Vegan Coaching, take one of my Demo Classes or register for the next Vegan Night Out! Oh! I’m also on Facebook, so be sure to like the fanpage! Together we can make 2019 a delicious plant-based year!