Tattoo Time!! The Mark of a TRUE Vegan

I LOVE BEING VEGAN!  For me, it is not just a diet, it is a lifestyle that embraces the practice of AHIMSA.

So, for the longest while, I’ve been wanting to add to my tattoo collection.  I already have four of them, in three of the four most common areas — one on the back of my shoulder.  This was my first one and to this day, or at least until this past February 23, 2018, my favorite, a delicate yellow rose piercing a red heart.  Two are on my left upper arm, one a black band and the second a small row of black thorns cradling a red rose.  The third and most recent before February 23 (got this one back in 1997) is a red rose (do you detect a theme going on with these older tattoos?) partially wrapping around my ankle with a butterfly approaching it.

All I can say about that last one is … ”Ouch”.  That one hurt like a son-of-gun, especially when the black outline pricks got close to the ankle bone.  It felt like it was on fire.  I actually needed to ask the tattoo artist to give me a moment several times during that process.  But, I persevered, for the sake of the tattoo.  Plus, it would have looked awfully lame to have a partially-done tattoo around the ankle.

I thought I’d never get another tattoo.  That is until I saw that vegan “V’.  I immediately knew that it was calling out my name.  I silently thought about it, obsessed about it, then tried for forget about it, then repeated the cycle over and over for probably the past year, at least.

That is, until I mentioned it at the most recent monthly Verde Valley Vegans Potluck that I host on the second Friday of every month.  I mentioned it to my friend, Kris, who immediately said that she would love to get it as well.  We continued the conversation a couple days later, refining what we wanted it to look like, and Kris got to work on it, designing and redesigning until what we envisioned in our minds was graphically manifested.

Kris had recently gotten a tattoo, but only after researching where she could find a tattoo parlor that used vegan ink.  Low and behold, right in our own backyard!  Ink Impression Tattoo in Cottonwood, Arizona was just the place.  And Tianna Behnke was just the right gal to do the job!

But let me back up for a moment…vegan tattoo?  What makes a tattoo NOT vegan?  Historically, tattoo inks and the aftercare products were not vegan.  There are many tattoo parlors today that continue to use non-vegan products.  However, that being said, there are many that are both knowingly, and some unknowingly, using vegan ink and other products.

Non-vegan ink is typically made of burnt animal bones and the resin from shellac beetles.  Also, the glycerin used to stabilize the ink derived made from sheep’s wool.  Vegan ink uses plant-derived glycerin, and it’s called Glycerol.

Other considerations regarding vegan tattooing include the razor used to shave the area to be tattooed.

Often, the razor used has a glycerin strip, which most likely is animal-derived rather than plant-derived.  If you’re unsure, bring your own razor.

Believe it or not, the stencil paper might not be vegan as it might also contain lanolin.

According to PETA, there are a host of vegan tattoo inks.  Brands such as Eternal, StarBrite, SkinCandy, and Stable Color are several on the market today.  For aftercare products, PETA recommends The Merry Hempsters Vegan Hemp Tattoo Balm, Black Cat Vitamin Infusion Serum, and OHana Organics Tattoo Butter.  They also say that ordinary jojoba oil, olive oil, or shea butter would do the trick (https://www.peta.org/about-peta/faq/tattoo-ink-vegan/ ).

After what I’m sure has been great anticipation on your part, it’s time now for the great REVEAL!

Kris went first.  Here she is proudly showing off her Vegan ‘V’.

After roughly a half-hour, it was my turn to take the chair. 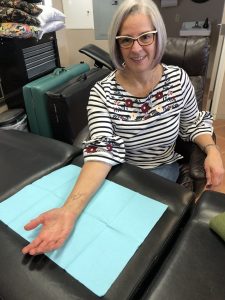 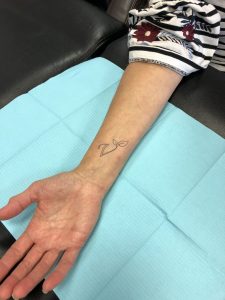 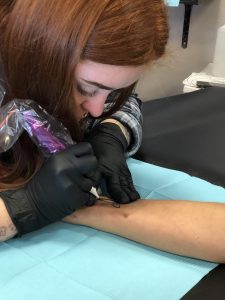 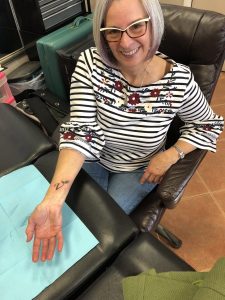 And now, Kris and I are officially tattoo sisters thanks to Tianna and Ink Impression Tattoo

Since I first posted this blog, it’s gotten some great feedback and exposure. But I was also introduced to Kelli who has a really in-depth article about tattooing in general. I thought it might be a great resource for those of you who haven’t ventured down and been “inked” yet. Check it out! It’s full of great info!