The Farside Bistro – A Breakdown of Our Vegan Night Out Came to Be!

Vegan Night Out here in the Sedona/Verde Valley area has become a much-anticipated event.  While we are known as one of the premiere vacation destinations in the world for its natural beauty and outdoor activities, vegan dining has not necessarily historically been in the forefront of many of the local restaurants.  That is, until recently.

As I work with each individual restaurant to craft their Vegan Night Out menu, restauranteurs are realizing that they can offer a variety of vegan options using the ingredients they already have in stock.  It’s really about providing education (and often recipes) regarding plant-based diets (and that ‘vegan’ is not synonymous with ‘gluten-free’).

To date, every restaurant I’ve worked with to create a Vegan Night Out has, at the very least, added vegan options to their menu.  One restaurant, Sound Bites Grill actually created a separate vegan menu that is actually a full page inclusive of starters, entrees, and desserts…and they didn’t need to purchase any additional pantry or refrigerated items.

Let’s Check Them Out!

My friend, Judith (yes, the one with whom I recently frolicked around with in Phoenix), and I both kept hearing about this Mediterranean/Persian restaurant in Cottonwood.  We were traipsing about one afternoon and decided that since we were in that neighborhood, we’d give it a whirl.  It was around 3:00pm, so after the lunch hour but before the dinner rush.  We were hoping that would give us some time to chat with the owners/operators, Golab and Hojat.  It was perfect timing.

We opened the door, and immediately the wafting of aromatic scents came billowing out of the kitchen, awakening our senses of smell and taste.  Golab greeted us with her welcoming smile and pleasant demeanor.

As she was seating us, we began the ‘we are vegan conversation’; and Golab was at the ready, willing to please.  She took us through the menu, explaining everything that was vegan and that which could be prepared vegan.  Such an amazing array to choose from.  What to do!  What to order!  Our minds went spinning about with all the options!

After several moments of Judith and I pondering over the selections and not being able to exclude any, we decided to go all-in….translation, we decided to order one of everything, yes I did say everything, on the menu that was vegan.

First up was a trio of Spicy Hummus, Hummus, and Baba Ganoush served with lavoush and chips.  The spicy hummus was more flavorfully spicy than spicy hot.  It had just the right amount of ‘heat’ for Judith, who is somewhat spicy heat averse.  I, on the other hand, adore a good spice that brings on the sweat but doesn’t burn to the point of negating all the other flavors at hand.  It was a perfect marriage between the trio.  The Baba Ganoush sang of both the eggplant and tahini, mutually standing proud homogenously blended with the other.  Even the regular hummus was not at all akin to the bland hummus purchased at stores.  Oh no, this hummus boasted the fresh full-bodied flavor of the garbanzo beans and tahini with the perfect amount of acid in the form of lemon to brighten it up to perfection.

Dolmas were served at room temperature to allow their flavor to burst forth.  The rice inside was succulent yet firm and herbaciously flavored.  Bathed in a light oil broth with cranberries and apricots, the tender grape leaves enrobing the rice.  These little ‘cigars’ were positively scrumptiously mouthwatering.

To cleanse our palates from the myriad of delightful flavors, up next came the Shirazi Salad, a blend of cucumbers, tomatoes, and onions lightly dressed with lemon and olive olive.  So simple yet so refined.  The perfect segue guiding us from our mezze to our entrees.

While far too many restaurants only offer what seems to be an afterthought vegan entrée (as in one, so no choice), Farside Bistro boasts three entrees that are vegan exactly as they on their menu.

Gheime Bademjan (try to say that one!) is the Persian version of a split pea, eggplant, and tomato stew.  Creamy without any cream, mouthwateringly flavorful with this main character medley being the star of its own homogenous show.

Gourmet Sabzi (vegetables) with Mushrooms… a mushroom lovers’ heaven on earth.  This dish is all about that amazing fungi, that dome on a stick.

Ah, but these two dishes need something to sop up their delectable ‘gravies’ so that they are not left behind.

Here’s where that most important human food that is one of the main contributors to the global food security takes its place at the Persian table…none other than rice.

Farside Bistro has mélange of rice options to accompany your meal.  We opted for the Saffron Rice and the Dill Rice, both Basmati rices but the similarity ends with their being the same rice.  Their preprations make them extraordinarily unique from each other, one being subtly pungent with backnotes possibly floral while the other is more verdant.  The perfect accompaniment for the two stews.

Pasta…pasta? In a Persian restaurant?  This transplanted Italian Jersey girl was skeptical, to say the least.  Now, I know that pasta originated in China, a fact that we Italians do tend to like to deny, forget about, ignore.  But, Persia?  Oh, YES, and I do mean, YES!!  While the dish that arrived was clearly a linguine pasta, it was neither Italian nor Thai, nor Chinese, nor Korean.  This pasta dish had a flavor clearly all its own, clearly Persian.  So, what makes it Persian?  Advieh.   Advieh???

Advieh is a Persian spice blend of equal parts cinnamon, nutmeg, rose petals, and cardamom, and one-half the amount of cumin, all ground together to make a wonderfully aromatic, hint of floral, pungent, acerbic, sweet yet spicy warm spice blend.

Along with the Advieh, turmeric and saffron are included in the pool of tomatoes that are simmered together.  To finish the pasta, the al dente linguine is finished by its final moments of cooking occurring in the sauce so that the pasta absorbs some of the gravy.

Not to be deterred, even though our bellies were more than full and definitely sated, we couldn’t pass up dessert, Halvah.  We finished our feast with pistachio and almond halvahs.  The perfect ending to an absolutely perfect meal.

To check out all of the great dishes, check out my post from my March 3rd.

Which All Lead To … The Farside

So, how did this mid-afternoon feast extravaganza impact the Vegan Night Out?  Well, simple.  We just duplicated the entire meal on February 28.  Sixteen people gathered around a long table; and we were fed, dish after dish, recreating Judith’s and my meal.  We ate to our hearts’ content; and when we could eat no more, Golab brought out take-home containers for everyone so that nothing was left behind.  A wonderful evening filled with great food, stellar conversation, and Vegan communing.

Oh, and Congratulations to both Hojat and Golab, who recently became American citizens.  We welcome you! 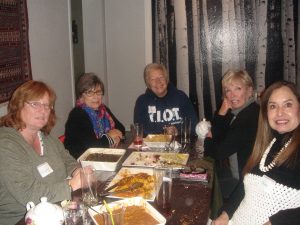 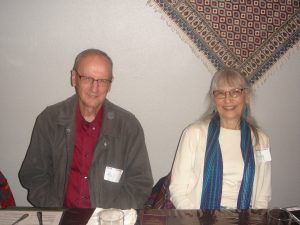 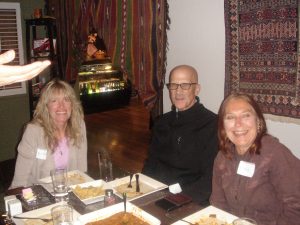 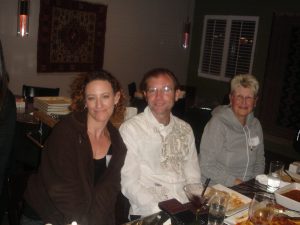