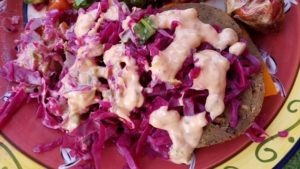 One of my favorite sandwiches EVER is a Reuben. Having been vegetarian since 1983 and before becoming vegan in 2007, the version I would order at the diner (Heck, I’m from Jersey, so you know that I know all about diners and diner food J) would be a meatless Reuben. I still conjure up visions of the delectable yumminess today, but it’s transformed a bit.

When I think of Reubens now, thoughts immediately go to The Chicago Diner, located in the Windy City. I have visited Chicago at least five times; and each time, it is an absolute necessity to eat there. The problem is, I have a hard time ordering anything but their Radical Reuben (but admittedly I typically order the Reuben and then some, leaving me in need of a wheelbarrow to be taken out of the joint), which they describe as “corned beef seitan, grilled onions, peppers, sauerkraut, vegan thousand island & cheese, on marbled rye”. Trust me, their description does not even begin to do it justice.

But, I don’t live anywhere close to Chicago; so I’ve had to come up with my own version, which has a couple of twists and turns…all good.

It starts with the best fresh-baked marbled rye bread that I can find. You can have it pre-sliced; but I prefer to slice it fresh myself. Plus, that way, I get to slice it a wee bit thicker than their slicing machines. If you are going to serve your Reuben open-faced, my favorite way to do so, toast the bread. Or better yet, slather it with some vegan creamy butter spread, and grill it on both sides.

I’ve made my own corned beef seitan; and admittedly, it’s quite yummy. However, I don’t always want to take the time it takes to make it homemade. Ah, but alas, today there is Field Roast Wild Mushroom or Smoked Tomato Deli Slices, quite a lovely swap out, if I can so. They work well in this sandwich. If you used a griddle to toast/grill the bread, warm up the deli slices as well, then layer them on top of your freshly-toasted/grilled rye bread.

For the cheese, it would definitely be Field Roast’s Chao cheese. It’s a revelation. However, that being said, I also love making homemade cheeses riffing on Miyoko Skinner’s recipes in her book, Artisan Vegan Cheese. Top your deli slices with the vegan cheese.

One of my newest favorite foods to make homemade in sauerkraut. It couldn’t be easier; and if you like kneading bread doughs (which I do), this will be right up your alley. For my version, I use red cabbage. You could use a mandolin or grater, but I prefer my trusty Shun Santoku knife. I cut the cabbage in quarters, then working from the opposite end of the core that remains in the quarter, I thinly slice the cabbage. When I get to the core, I simply work the knife around the core, getting all the cabbage leaf shreds available, then compost the remaining core. Put the shredded cabbage in a very large bowl, and sprinkle a small amount of Himalayan pink sea salt over it (for a very large head of cabbage, I use between 2 teaspoons and a tablespoon, definitely not more than that). Proceed to kneed/massage the salt into the cabbage until it begins to exude its liquid, then kneed/massage even more. At the point when the liquid begins to show itself, sprinkle between 1-2 teaspoons caraway seeds into the pool. When you think you simply can’t massage any more, walk away for a few minutes. Have a glass of wine or a cup of tea, then go back and massage a wee bit more. The cabbage should start to wilt slightly and you should have a surprising about of liquid. Pack the cabbage into a very clean glass mason jar, or similar, ensuring that you are releasing all the air bubbles out of the cabbage as you pack it in. Once you have all cabbage in the jar, add the cabbage juice, and pack again, ensuring that you remove any air bubbles. If you don’t have enough liquid to cover the cabbage, add water to cover the cabbage. I put a layer of waxed paper over the cabbage and then weight it down, ensuring that all the cabbage is covered. I’ve actually just added water to a smaller jar that will loosely fit inside the mouth of the jar. Put in a cool, dark place; and cover with a clean towel. Let it stay there for at least 5-7 days. It will begin to take on the aroma of sauerkraut; and when it does, viola! You have sauerkraut. Remove the towel and weight, put the lid on the jar, and refrigerate. Since it is fermented, the sauerkraut will last about two weeks in the refrigerator; but let’s be honest here, with the anticipation of eating a Reuben, doubtful it will hang around that long.

Speaking of Reuben, let’s get back to it. Now that you have your rye bread stacked with deli slices and cheese, go ahead and top it with sauerkraut that you’ve warmed. Be generous. You can never have too much sauerkraut!

For the Russian dressing, I make my own mixture of ketchup, a touch of sriracha, capers, and minced sweet gherkins. With the addition of capers, skip the salt. Make it your own here. I tend to like mine with the hint of heat from the sriracha as a nice juxtaposition to the sweetness of the pickle. Either way, you don’t want to skimp here either. Be munificent with the dressing.

Since you’re making the dressing, make a lot so you have enough to dunk your side dish of air-fried French fries.

And like The Chicago Diner, what should you be serving with as your beverage with your Reuben and fries? Well, a shake, of course! This is no time for being bashful; and after all, you air-fried the French fries. So no guilt! Make your best vegan milkshake. Since the flavors will be bouncing with the Reuben, I’d suggest going with your standard go-to’s of either Vanilla or Chocolate. Easy breezy. Just scoop some of your favorite vegan ice cream into a blender, add some extra vanilla or chocolate, some vegan milk, and whiz it up! Serve in a tall glass with a straw!

It might not be The Chicago Diner, but I’m already salivating. Gotta run! Kitchen is calling—on the menu tonight—Reuben, of course!

*An important aspect of sharing original recipes is to give proper credit to the author(s) of the recipe(s). I hope that you enjoy using these recipes and making them your own; but please do so with that integrity in mind. With much gratitude. Linda