The Predicaments With Prickly Pears 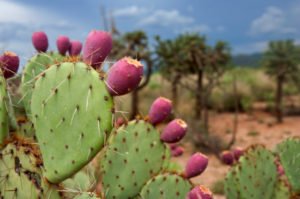 For those of us who remember Star Trek, The Trouble With Tribbles provided figurative thorns in Captain Kirk’s side. Not to dissimilar is the predicament with prickly pears, except that they provide literal thorns.

Prickly pear cacti, a member of the opuntia genus, abound here in the Southwest. The cactus itself is a paddle with spines. In the summer, they first burst with beautiful flowers, and by mid-September, they are bearing the most fascinating fruit, aka Indian fig. When ripe, its skin is a vibrantly-rich maroon thick exterior ensconced with even more spines. These spines are hair-like prickles, the smaller ones almost invisible to the naked eye; and the more mature ones looking like barbs ready to strike. Touch one, and those almost invisible spines will not-so-politely remove themselves from the prickly pear and insert themselves into your penetrable skin. And that’s when the fun begins. Ah, but I am getting ahead of myself.

The real prize is what lies beneath this defensive outer layer. The ripened flesh yields a sweet, flavorful yet delicate, juice. Now, I know what you might be envisioning–that most awful prickly pear jelly that every single souvenir shop in the Southwest sells. Nothing could be more wrong that than that sugar-laden, not-even-recognizable product that is not even faintly reminiscent of the delicacy that awaits those who are bold enough to go where most have not gone before. And thus, our journey into exploring strange new worlds begins…

Being a Jersey girl, the fauna and flora of Arizona is like being in another world. So much beauty, so much opportunity to seek out what feels like new life and civilizations. And so, back to the prickly pear. I’ve been captivated by it’s armour and what lies beyond.
With the monsoon season being so wet this year, Indian figs were everywhere. My neighbor had a particularly enthralling set of plants that were literally covered with the fruit at its peak of ripeness. I could no longer resist the allure. Thankfully, my lovely friends were willing to allow me to pilfer their prickly pears.

Hence, with bucket in hand and what we thought were sturdy gloves on hands, Richard and I embarked on our journey of the harvest. We started out with pliers, much to the amusement of our neighbors. Ultimately, we landed with kitchen tongs to gently twist the pears off the paddles. Into the bucket they went, until we could fit no more. 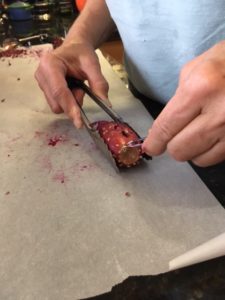 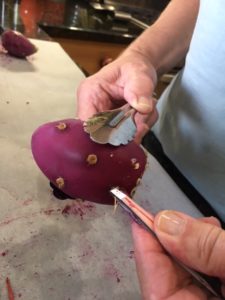 Back home, the task of removing the spines began. With a small tong holding the prickly pear, we painstakingly used tweezers to remove the spines. A daunting task, to say the least. 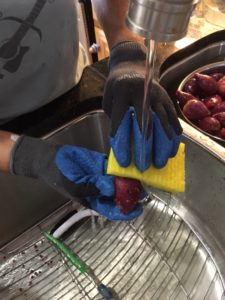 Three hours later, and uncountable spines having transferred themselves into our flesh, we moved on to the next task, washing the prickly pears to remove the remaining “invisible” spines (from the prickly pears, not ourselves, as that remained a task to be addressed later).

Not being one to dawdle, we moved on. The final stage was the actual juicing of the pears. This was made effortless with a juicer. Pulp out of one shoot, and twenty cups of prickly pear juice out of the other. The juice is a rather viscous purple red liquid. Oh so sweet!
While most of it made its way into the freezer by way of ice cube trays and small containers, I had to, I just had to try to redeem the forsaken prickly pear jelly.

Out came the chia seeds and a scant amount of unrefined cane sugar. Into a saucepan with some prickly pear juice, the gas burner turned to medium, and the whisk keeping the contents moving until it came to a boil, reduced the heat to a simmer, and continued to stir until the chia seeds started to work their magic and the mixture began to thicken. Once cooled, into jars it went. Complete redemption! Nothing at all like what you buy in the stores. So full of flavor. The perfect accompaniment on a scone, or piece of toast. 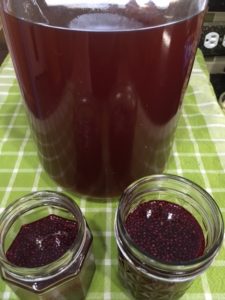 For the next three days, I was forever reaching for the tweezers to pull out yet another thorn in my side, aka prickly pear spine from my hands. But, I also reached for a cold, refreshing glass of prickly pear black iced tea that helped me to forget all about the Predicament with Prickly Pears.