Unexpected Dining Pleasure Before The Ballet Under The Stars

In addition to being a vegan food snob, I am also an avid live theater enthusiast.  While a sucker for a great musical, I also very much enjoy all sorts of live theater, including concerts of most musical genres (sans country western), plays, etc.

As a season ticket holder at the ASU Gammage for the touring Broadway series, I often receive advance ticket sales offers for upcoming events taking place at other venues.

So, when I received the email for a night of ballet under the stars, I was enthralled and definitely purchasing tickets.  The event was Eroica, a ballet done to the score of Beethovan’s Third Symphony as performed by the Phoenix Ballet, but not in a theater.  Oh, no.  This was to be incredibly special.  It was under the stars, just after sunset, at the lush Desert Botanical Gardens in Phoenix.  My tickets were at the second table, first row, and included admission to the Botanical Gardens.

My dear friend, Janet, was visiting from New Jersey, so off we went down to the Valley for a couple of days of fun in the sun (and extreme dry heat).  But, thankfully, our hotel had a pool, which we frequented often in between our jaunts out and about.

We arrived at the Desert Botanical Gardens around 4pm and strolled about the lush desert scenery until we felt like we were melting.  Our bottles of water were empty.  We were parched and hungry, so we decided to venture into the Botanical Gardens restaurant, Gertrude’s, with little to no expectations of a glorious meal.  We needed copious amounts of libations, and quickly.  We figured that, in terms of something to eat, we’d need to piece together a salad, at best, hoping that they had more than just oil and vinegar as a salad dressing to offer us.

Well, were we surprised!

Their menu is incredibly creative with many unexpected ingredients paired together to create not only visually stunning offerings but also tastefully done.  They were works of art for the eyes and the palate.

Everything on their menu is labeled if it’s gluten-free, vegetarian, or vegan.  And some of their vegetarian options were easily veganified.

My entrée had me at the Huitlacoche stock.  So, you might asking, what the heck is Huitlacoche?  Well, simply put, it’s a fungus that grows on corn.  It’s actually considered a delicacy in Mexico and is used to flavor food.  Some refer to it as corn smut or a Mexican truffle, although it does not come out from the earth as a truffle does.  It is nicknamed more for its pungent aroma.  It can only grow on organic corn as the fungus cannot grow on an ear of corn that’s been chemically sprayed.  OK, I’ve digressed a bit, but in the interest of ingredient literacy, I thought it might be of interest.

Anyway, I ordered the Red Chile Risotto, which came in a white ceramic bowl with a massive lip.  It was artfully stacked as a dome in the bowl.  Its red color bounced up at you juxtaposed against the white of the dish.  But, oh, the fragrance was one to behold.  The aromatic red chile and Huitlacoche stock paired beautifully with the diced smoked asparagus that flanked the risotto.  Grilled Enochi mushrooms provided the textural contrast.  Honestly, it was one of the most flavorful dishes I’ve ever been served in a restaurant.  I was, to say the least, blown away!

We plunged into our meals so stealthfully that we were near done before I realized that I failed to pull my camera out of my pocketbook to capture these two works of vegan food art!  So sorry.  My apologies.  I guess you’ll just have to take a trek down to Phoenix and experience this for yourself.

But, we didn’t completely fail.  We did remember to snap a quick photo of our shared dessert before we dove in.  We had not one, but two options to select from.  One was a fruit cobbler (that day’s fruit was peaches) paired with a lemon sorbet.  The second was a Petite Cheesecake, Maqui Berries and Cashews with a ginger snap crust and edible flowers.  Not included in the description but sharing the ‘cheese’ part of the cheesecake was an equal measure of a mango cheesecake filling, thus the half-purplish blue and half orange cheesecake.

It was delicate and creamy, with the berries and the mango each standing alone succinctly with their flavors but not competing with each other.  We didn’t leave a morsel.

After our bellies were unexpectedly and delightfully sated, off we walked to the area where the ballet was to take place.  The sun was just beginning to set.

The temperature was, thankfully, shifting from sweltering to almost pleasant; but we quickly forgot about the heat when the ballet dancers took to the stage to warm up to the  commands of their choreographer.

We were seated with a couple who had recently moved to the Phoenix Valley from Hawaii, and engaged in pleasantries with them until the show began.

The show lasted just under an hour, and it seemed like only minutes.  Breathtaking. The form, strength, and grace of each and every ballet dancer was amazing.

The dancers moved in sync to the music to create an emotional atmosphere where we were completely taken in to the music, to the movement, to the entire evening.

As we were leaving, I made a mental note to ensure that this becomes an annual event for me. 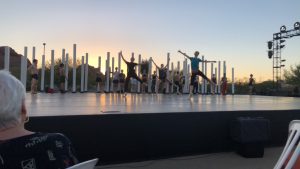 Be sure to follow the blog to keep up with me and my Vegan-ventures!