Being the first year that I am solely responsible for my garden, I decided to keep it simple. Rather than that ‘all or nothing’ mentality, I chose to go with a variety of heirloom tomato plants, a couple of pepper plants, lots of herbs, a shot at watermelons, and the artichokes that I’d planted last year. Some marigolds and borage scattered about for beauty and function (they are great natural deterrents to the javelina, rabbits, and tomato hornworm that can decimate a tomato plant in one evening.) So in other words, manageable. 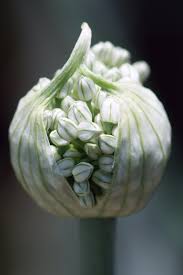 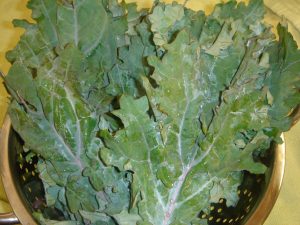 Kale Just Picked from the Garden

But, I had some very pleasant surprises sprout up. Over the winter, a renegade onion decided to sprout in my pantry. Not wanting to waste it and figuring it was worth the experiment, I planted it in the garden and left it alone. Sure enough, it grew. Not only did it grow, but it sprouted a long stem with a beautiful flower pod at the top, which subsequently burst, spreading its feathered-like seeds all about my garden. It reminded me of Richie Havens singing “Freedom” at the Woodstock opening.

A couple of months later, lo and behold, what appeared to be scallions began to sprout all about the garden; so I figured, heck, let them have their freedom to blossom and grow…and grow they did.

Initially, I used them as scallions but soon made the executive decision to allow them to mature into the onions they were meant to become. For the past couple weeks, I’ve been harvesting these lovely sweet white bulbous volunteers. Oh, so sweet. So juicy. So firm yet tender.

And then, I had to leave to travel to the other side of country for almost two weeks. What would become of my garden? Well, to be fair, it is irrigated. I also mentioned to both my cat sitter who moves in while I’m away and to the vet tech who comes daily to do the Sub-Q fluids for my elderly Tasha to feel free to harvest and enjoy the bounty of my garden while I was away.

On the 2 hour ride home on the shuttle from PHX back home to the Sedona area, visions of my garden kept creeping in. What would be there to greet me? As soon as my luggage was safely parked in the living room, I made a dash outside to check it out.

And there it was! A lone kale plant, a volunteer, that found its way into the soil. I haven’t ever planted kale in the garden; but heck, I’ll take it. I also have a plethora of squash growing as well that must have come from the compost.

Having been eating out for the better part of my time away, I had a yearning for fresh produce and my home cooking. I immediately knew exactly what I would be making….my Dutch Grandmother’s Kale and Potato Casserole, veganified to satisfy my palate and my practice of Ahimsa. 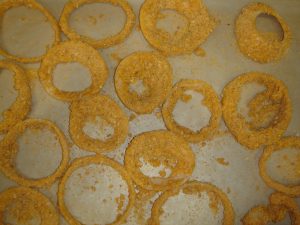 So, I harvested two onions and the entire kale plant. The onions were aplenty, so I sliced some, which would make their way into the air fryer as onion rings after being bathed in a slurry of vegan mayo, mustard and water then dressed with homemade bread crumbs that are always at the ready in my freezer. The rest of the onions were chopped and tossed into a sauté pan, where they were slowly caramelized, then parked.

While this was happening, I concurrently peeled some Idaho baking potatoes, cubed them, and boiled them in a copious amount of salted-like-the-sea water.The kale leaves where chiffonaded and wilted in a saute pan with about a ½ teaspoon of liquid smoke, then set aside. 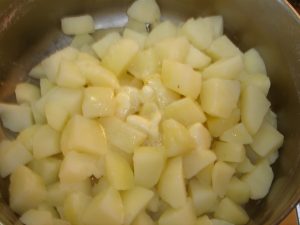 Potatoes Boiled and Ready for Mashing

Once the potatoes were fork tender, I drained them and returned them back to their pot, adding just enough Miyoko’s vegan cultured butter and chicken-less broth to make them creamy but still a bit on the drier side (as they will receive a tad more moisture from the veggies they were about to meet). 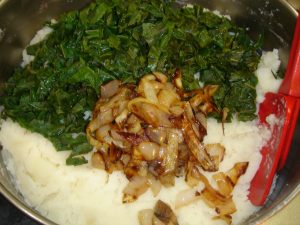 Everything Into the Bowl

Into the pot went the garden volunteers, the caramelized onions and wilted kale, stirring them into the potatoes until well blended. The mixture was then scooped into a casserole dish and dotted with some more of that amazing Miyoko’s butter. 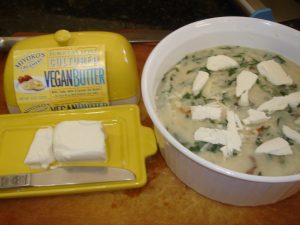 Another delicious and fun preparation is to make kale and potato patties instead of a casserole. You would form the patties, then fry them in a skillet until brown on both sides.

This is one of my go-to comfort foods when I am looking for food to sooth what ails me. I always feel better afterwards. 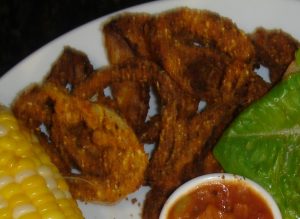 Onion Rings out of the air fryer

Be sure to follow the recipes blog for more great Veganification cooking creations!