Welcome to My Backyard

I hope you just watched and enjoyed my introduction to the perennial bed that’s in my backyard.  It so exceeded my expectations this year; and as you saw, I will be needing to move two of the larger plants to other locations in the yard that will be better suited to their majesty.  But geez, they are really gorgeous, aren’t they?  The Hollyhock just blows me away in its beauty.  But then again, every plant in the yard does the same thing for different reasons.

Before I get into updating you on the progress of my vegetable garden, I thought it might be helpful to provide you with a brief background.

Five years ago, I decided that I wanted to build a raised-bed garden.  I used pecky cedar, which basically looks like railroad ties, but that’s where the similarity ends. Pecky cedar is rot resistant because it doesn’t absorb water.  In addition, pests detest this wood, so there isn’t the concern of termites or other pests having their way with your raised bed.  It is also naturally anti-bacterial, so there is no need to seal the wood, leaving it in its au-natural state.  Excellent beginnings for a raised-bed garden.

I decided to make mine 16’x8’, as the ties are 8’ long, by two ties high.  To secure the ties, I personally sledge-hammered in 36 three-foot long rebars, half on the inside staggered by the other half on the outside (and yes, I actually did it myself with the only assistance being having someone hold the rebar for the first couple of whacks).  It took several days to do this as my arms needed some rest in between; but when it was done, such a beautiful sight.

I ordered organic garden soil; and was quite disappointed when it was delivered.  It just didn’t seem to be the lush, earthy, garden soil I had imagined.  Lo and behold, my instincts were correct.  When it rained, it became hard like a rock, literally.  Over the next couple years, I tried tending to it by adding in other soils, composting material, and the like; but the results were abysmal.

So I made the decision at the end of last summer to simply start again.  I had the top 8” of soil removed.  And this time, I ensured that the soil I received was, in fact, organic garden soil.  Such a huge difference right out of the gate!

A friend of mine has a worm colony; and she gifted me with a bucket of lively worms residing in shredded paper.  I was instructed to feed them coffee grinds and extra paper, keeping them moist but not wet, until they appeared to be growing and multiplying.  Once that occurred, I relocated them early last fall into the center of the one end of the garden.  I continued to tend to them as instructed and began composting all my kitchen scraps (citrus excluded) directly into the garden, book-ending the worms.  Very quickly, the worms caught on and migrated into those two areas.  Once that occurred, I started composting in the next segment of the garden immediately next to them.  Over the winter, as they would migrate, I’d move on and compost into the next section, until lo and behold, they were now multiplying and thriving throughout the entire garden.

When it came time to begin planting this spring, the soil was soft, earthly fragrant, and ready to take on and support new life.  Around this same time, in the section where I had initially begun composting, green stems began poking their heads out of the soil.  I hadn’t yet planted anything, so I decided to allow that section to be the volunteers in the garden.  The excitement of not knowing what is going to grow has been a fun exploration.

The first plants that began to show themselves had/have lovely leaves that grow close together.  I had no idea what they were, so I gently pulled one plant out of the soil and was so absolutely delighted to find that there were several very tiny potatoes at the very bottom.  I gently re-planted it.  As you can see from the garden, there are now two very distinct rows of potatoes growing with several individual plants strewn in between.  Additionally, I’ve had at least 25 of the same plant emerge.

Another delight that sprung up were cucumbers.   I started with retaining two that are now growing up around two garden trellises.   As more emerge and reveal themselves as cucumbers, I am relocating them to now three trellises.   Today, they are aplenty with lots of flowers and teeny tiny cucumbers.  I am so looking forward to making pickles with them, sweet, dill, and hot/sweet.

In the meantime, I’ve planted some seeds in that area to take advantage of the empty space.  At first, I planted basil in one section, and it didn’t seem to take, so I planted some okra seeds in the same area.  Currently, the basil is now beginning to come up amidst several okra baby plants.  .

I’ve also planted dill seeds and red Russian kale, which are both now growing quite happily, in addition to the two watermelon plants that I planted in the volunteer section.

Over the past several years, I was planting tomatoes in the garden and was besieged by the tomato hornworm.  This caterpillar has the capability in literally one night to devour an entire tomato plant, leaves and stems.  They are devastating. Since they readily blend right in to the plants, they are difficult to find; and once they are introduced to your garden, they make it home and gladly reproduce.  So since I was starting with all brand new soil this season, I am determined to not have them take up residence here, which is why my four tomato plants are in pots in the yard and not near the garden.

The Romas, as you can see from the photo, were off to a very slow start; but they are just now beginning to grow and blossom several fruit flowers.  The Heirloom tomato and Big Boy both have a plethora of flowers and have begun fruiting. 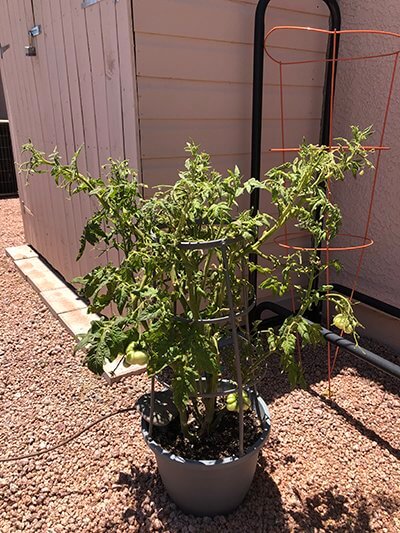 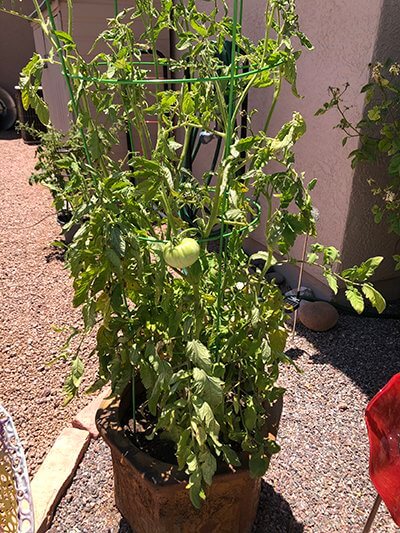 Now, that being said, it hasn’t been without some intervention.  The tomatoes, along with the eggplants, peppers, and zucchinis, were blossoming but not producing veggies.  After doing a little googling research, I learned about giving some assistance with pollinating.  My first attempt was using a Q-tip, which felt really awkward, so I moved on to a very tiny paint brush.  Magic!  Doing one species at a time, I gently put the paintbrush inside each flower, gave it some gentle movement to bring some of the pollen on the brush, then moved to the next flower, going all around the plant(s) and back again to the first flower.  By the next week, I literally had eight eggplants on one plant and seven on the other growing.

It’s been unseasonably warm here in the Verde Valley, although the nights do tend to cool off somewhat.  The leaf lettuce and spinach seemed to come to a standstill over the past couple weeks. I’ve put a cloche over them, which I can open up for several hours each day so they can bask in the sun but then get covered up for the bulk of the day so as to avoid them bolting, at least for now.  They both seem to be quite happy with their ‘sunglasses’.

… For a Pop of Pest Controlling Color

When planned accordingly, it’s amazing how much can be planted in a space that isn’t terribly large.  If you watched the previous video, you will see how I added herbs and flowers around the perimeter.  They serve a triple purpose of providing fresh herbs on a regular basis and add some color and diversity to the garden but also act as a natural pest deterrent as insects and some smaller animals don’t like the scents that they emit. As their flowers perish, I remove them and crush them to spread their seeds around the perimeter.  Soon, they, too, will be bring additional life, color, and pest control to the garden.

The volunteer onions, while naturally popping up wherever they like, I’ve been able to relocate some of them in between the eggplants.  In the fall, I will likely plant some greens where I remove the onions. And as the larger summer crops complete their annual life cycle or are harvested (such as the carrots, squashes, and beans), it will also be time to plant some colder weather crops, such as possibly broccoli and cauliflower.

Peaches, Figs and Apricots – Oh My!

In addition to my vegetable garden, I’ve been working on creating a very small orchard in the backyard.  Several years ago, I planted a dwarf peach tree.  It’s been producing quite a harvest of peaches annually; however, this year it seems to have become infected with peach scab. 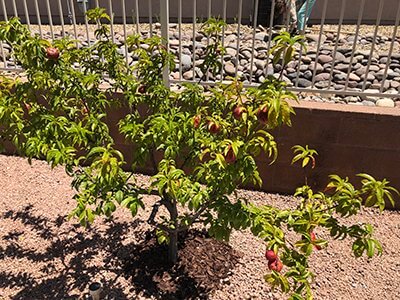 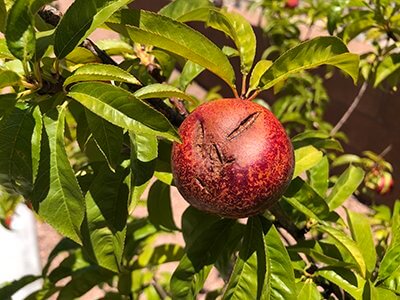 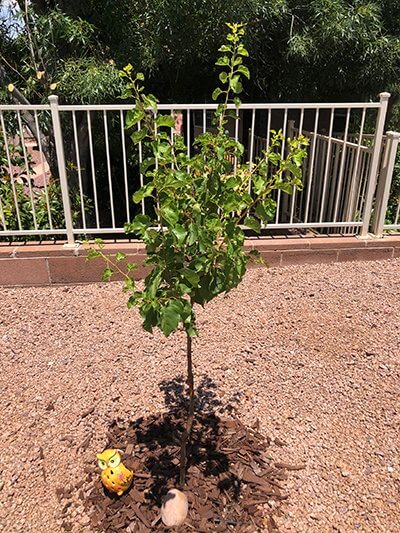 I’ve been busy researching how to handle it; but the opinion seems unanimous—I must remove all the peaches as well as the diseased leaves, then spray with an anti-fungal.  The one I am opting to use is called Serenade Garden AGRSER32 Disease Control Effective Organic Fungicide, which is organic and has no intolerance to the warmer weather.  Once the weather is consistently below 85°F, I will switch over to a solution of Neem to ensure that the peach tree winters over in a healthy fashion.  Neem is warmer weather intolerant, so it is recommended to avoid using it during that time as it could injure your plants.

Three years ago, I purchased this mission fig tree as a small plant that was kept in the house.  Last summer, it got moved outdoors and into a larger pot; and in the fall, it made its way into the ground.  I am so pleasantly surprised that, even though it is small in stature, it already has four figs on its branches.

This year, I added two new trees to the yard, an apricot tree and a grafted pear tree.  Now, the pear tree is quite an intriguing being.  It is a semi-dwarf tree that has four branches that have been grafted onto the main trunk, each branch being a different pear that will mature at a different time than the others (Warren, Keifer, Harrow Delight, and Blake’s Pride).  I purchased it from groworganic.com. From that same company, I will be adding a grafted plum pluot tree when they come back in stock in the fall/early winter.

Henry and The King

And in the process, I’ve made two new friends….meet Henry, the toad; and King, the King snake, both of whom who have taken up residence here. 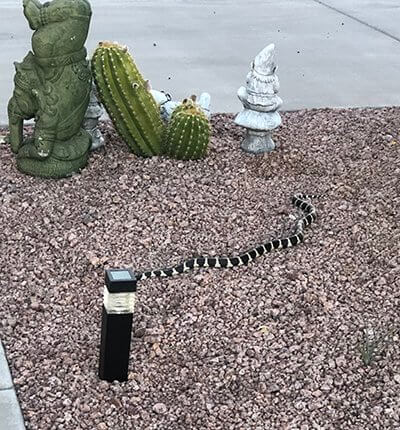 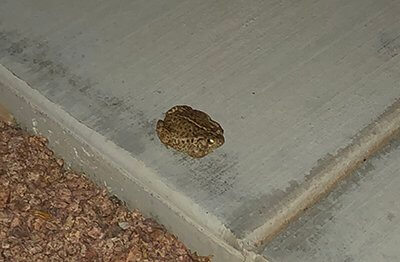 So, I’m learning so much as I move through this gardening season.  It is definitely far different from what I was used to in New Jersey.  Lessons are being learned, and like anything new, I hope to build upon each lesson as I implement veganic gardening.

I hope you’ve enjoyed the tour of my backyard garden oasis.  Stay tuned for my next blog post, which will be “Solar Lights Gone Wild”.  I seem to have gone a bit crazy for the solar light accessories; but it has created a nighttime wonderland.