Welcome to my blog, Veganification.com 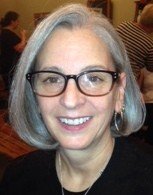 My name is Linda Voorhis. I am looking forward to sharing a bit of me, and hopefully getting to know you, as we journey together through this process of becoming and being vegan.

So, with that said….here’s a brief look into me and how I got to where I am today…

I’ve always had a love for cooking and read cookbooks and cooking magazines the way other people read books.   They inspire me to create my own recipes and have taught me the ‘science’ of cooking, most especially baking. Julia Child (definitely nothing veg about her, but probably the greatest skills technician) and my maternal Italian grandmother, Mary, were my first mentors. With the advent of the celebrity chef and abundance of television cooking shows, inspiration continued to be placed before me. Food, its preparation with love, and the creativity it sparks within me, became a passion of mine.

Near of the end of the 20th century, I briefly owned a small café, wherein I was able to hone and perfect my skills and recipes. Although it started out as a luncheonette, the café very quickly became known for its veg alternatives and completely homemade menu. But that’s not where the story begins…

As a child, the nightly urging from my parents to “eat your meat” rang out as I insisted that I much preferred the wonderful array of carbohydrate “sides” and the veggies that were presented on the table. In reflection, I think I was always veg, it just took a few years for my body/mind to catch up with my inner reality.

In 1983, I became a vegetarian who continued to eat dairy and eggs (lacto-ovo); however, in January, 2008, while on an airplane flight, my life was forever changed, thanks to Freya Dinshah, the Executive Director of the American Vegan Society, who I met at a vegetarian potluck two months prior and recommended a particular book, which I finally got around to reading the infamous day in January, 208, while on an airplane. I was reading Skinny Bitches, by Rory Freedman and Kim Barnouin.   It was impossible to unlearn what I had just read regarding the cruelty involved in the dairy and egg industry. As a person who would be considered rather intelligent, I was astonished at the fact that it took me 25 years to learn about these atrocities. I had absolutely no idea! I had completely bought into the “happy cow from California” mindset as well as those meaningless catch phrases—such as, free-range, vegetarian fed, antibiotic free. I was absolutely devastated. It was one of those AHA! moments in life where you know that your life will never, not ever, be the same again. So much for my carried-on airplane meal of cheese, hard-boiled egg, crackers, carrots and fruit. I couldn’t even bring myself to open the bag to take out and eat only the vegan items. So began my journey of becoming and being vegan.

With that, came a new-found quest….taking on the challenge of veganizing all my veg and non-veg recipes. Over time, I’ve amassed an extensive cadre of my own original recipes and others’ inspirational recipes to work with. I will be sharing with you many of my veganized recipes and thoughts about why I used the ingredients and/or techniques to get results that even a non-veg person would be convinced he/she is eating ‘normal’ food. As my veganification skills continue to evolve and as new and improved vegan products come out to market, my now-vegan recipes continue to be transformed and re-transformed. One of my hopes for you, as you read my blog entries, is that you become inspired to take the thoughts and techniques that I talk about and use them to translate your own beloved recipes into vegan delicacies and delectables.

This past June, 2016, I had the greatest pleasure of attending Victoria Moran’s Main Street Vegan Academy (MSVA); and am now a Vegan Lifestyle Coach & Educator. If you can carve out 5-1/2 days and head to New York City, the MSVA is a must-do for anyone interested in being a positive vegan lifestyle advocate/activist. You will be astounded by the wonderful list of presenters that are part of the MSVA. In addition to the amazing learning environment that is created during this Academy, there are exceptional “field trips” to some of the best vegan eateries in the country, including Candle Café West (as well as my absolute favorite shoe store, Moo Shoes.) But equally exciting and important is the network of like-minded, wonderful people you will meet through networking with the other participants in your class as well as the ever-growing number of alumni, who reside throughout the world. An experience that cannot be replicated anywhere else at this time. Highly recommended!

I very much appreciate the plethora of dining opportunities that abound today. Even non-veg restaurants are beginning to offer suitable vegetarian and vegan options. In fact, some of my most notable vegan dining experiences have been in non-veg restaurants. You’ll hear about my adventures, both good and bad, as I venture out into the dining world.

Oh, did I mention that I also could be nicknamed “Imelda Marcos”? In case you haven’t heard of her, she was the wife of the Philippine dictator, Ferdinand Marcos, who ruled from 1965-86. However, she probably become more noted for the number of shoes she owned; thus, my nickname. So, I’ll blog about my fashion and shopping adventures on occasion.

Join me as, together, we celebrate the journey of becoming and being vegan.