An Interview with Yours Truly!

What a Great Question!

The following was copied from the October issue of Healthy World Sedona’s monthly Newsletter. You can download a full copy here, or visit the website here and view it online … But for those of you who would rather read it on my site, please, enjoy! 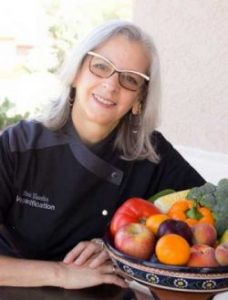 For October and November, “My Plant-Based Story” will feature our wonderful “Plant-based Cooking Tips” contributors. Check out Linda’s tip for this month following her story. We are so grateful for her creative culinary contributions – and we’re excited about her upcoming new cookbook!

HWS: What led you to adopt a whole food plant-based lifestyle?

LV: In 2006 when I moved to South Jersey, I knew no one and couldn’t find my tribe.  In November of 2007, I searched and found a group called the Vegetarian Society of South Jersey. They were having a Thanksgiving potluck, so I signed up. They requested that, although they were the Vegetarian Society, only vegan options could be brought. Freya Dinshah, co-founder of the American Vegan Society was there tabling a small book s le. I was traveling to New Jersey that following January, and I asked her if she had a book that I could read on the plane, and that would describe to me what it meant to be vegan. I knew that 1t was more of a lifestyle than just a food plan.

HWS: Were you already vegetarian at that time?

LV: I had been lacto-ovo vegetarian since February of 1983. It started out as my Lenten sacrifice, and I realized that I never really liked me t. It wasn’t a sacrifice – I actually enjoyed it. I decided to not go back to eating any meat. I found he Vegetarian Times magazine and subscribed.  But somehow, I missed all the information about factory farming. I completely bought into the happy California cow commercial. I bought only free range, vegetarian-fed eggs, and the cheese was all organic. I really thought they were grazing in a field. It never occurred to me what was happening until I was on the airplane and started reading the book that Freya recommended which was the NY Times bestseller Skinny Bitches: All was going along pretty well until I got to the factory farming part and what happens to the chickens on egg farms, and to dairy cows. I had no idea.  I started to cry.  I was sitting in the middle seat with two strange men on each side of me, and I was sobbing. They said, “Lady, are you okay?” And I immediately knew that I wasn’t. I said, “No, my life is forever changed, and I can’t believe that all these years I’ve been contributing to the slaughter and painful lives of other sentient beings!” I knew a that moment I was never going back. I had my airplane meal of a hard-boiled egg, cheese and crackers and a piece of fruit, and I couldn’t even eat it.  I said to them, “I can’t unlearn what I just learned, and my life is forever changed because of it.” I wasn’t happy, because I loved cheese. I ate cheese every single day, without missing. It was personally my top favorite food group – I put cheese in its very own food group. I also believe the myth that you need it for the protein.  I went vegetarian thinking it was for my health and for helping other animals and the environment.  I went vegan because of the animals.

HWS: How did you make the transition?

LV: Not easily. For the first month my favorite cheese wasn’t at the store where I shopped, so I was good.   But about four weeks into it there was a big sign over the dairy section that the cheese was in. I thought, “I could have just one wheel of that,” so I put it in my cart and walked away. As soon as I looked own at it in my cart I thought, No, I can’t do this,” and I put it back.  I did that three times, and on the third time I realized that no matter how much I adored that cheese I couldn’t do it. So, I started to cry, there in front of the fromager, and through my tears and sobbing told her what the matter was.  She said, “Well I give you a lot of credit, ” and I said ”Yeah but I wish I didn’t know anymore.”  I think that cry was my final letting go and accepting the things I could not change. There was no way I could eat any kind of dairy ever again and in good conscience be okay with it. I was done.

HWS: You have a strong sense of integrity.

LV: It wasn’t easy – the dairy or the eggs. The eggs I was okay with, except baking. That was a bit of a struggle, but I just experimented and came up with alternatives. I asked myself, what was the purpose of the egg in this recipe? Is it for leaving, or binding, or moisture? And I thought about what I might use for each one of those three things. I was pretty successful, and it became a non-issue for the eggs. For dairy it was my p late. It wouldn’t ever taste that good knowing what I was contributing to, and there weren’t any good cheese alternatives at that time. Even when they started coming out, I thought they were not so good. Then when the one cookbook came out by Miyoko Skinner, Vegan Artisan Cheeses, I just tweaked a couple of her recipes and made them my own, and I really do like my own cheeses. I don’t make them often, but when I have a hankering, I can make something that’s delicious to my taste buds.

HWS: Talk about your journey from deciding to be vegan, to becoming the “SUPER VEGAN” who TEACHES OTHER people, with veganism such a defining aspect of your life.

LV: For the first time I had a tribe. I finally had people I could talk and relate to. And I am kind of the Pearl Mesta of wherever I live.  Pearl Mesta used to do all the parties in Washington, D.C. I love to gather people, so I started doing potlucks on a regular bas1_s, and for any of the holiday potlucks I started hosting them and experimenting.  I would JUST play with recipes and “veganify” my non-vegan recipes and create new ones. And they worked. People started saying, “Why don’t you show us how to do that?” so some of the potlucks became demos. When I moved to the Sedona area, it was a natural progression. I trademarked “veganification,” and that became where I focused all my energy – wanting blogs, doing recipes, doing speaker engagements. I really love the culinary demos.

HWS: Talk about what’s next for you.

LV: I’m working on my cookbook.  It’s very exciting! I have a bunch of recipes. I need to tweak them and pare them down because I have too many for the book. I’m hoping to publish it sometime in 2020.

HWS: Do you have a title yet?

LV: As you know, my tagline for Veganification is “Celebrating the Journey of Becoming and Being vegan, and here’s my thinking process for how I swapped this ingredient for that one.” My hope is that readers can then take that thinking and take their own heirloom family recipes and feel confident to do the same thing.

HWS: It’s a guidebook as well as a recipe book?

LV:  I’m hoping so, because even in the chapters with all the recipes I created doing the culinary demos, where there’s no non-vegan recipe to precede them, I’m going to put substitutions and swap-out so people can  look at that recipe and make 1t their own. It might be changing a vegetable or adding different spices to make it taste completely different. Each one of the recipes will have a tip like that to make it their own.

HWS: What’s the difference you hope that you’re making in the world.

LV: I used to say that I was just an advocate because I shied away from the term “activist.” Then I realized, as I was writing recipes, that this is exactly my form of activism. I’m not one to go to protests. I love feeding people. I love gathering people. This is the way I can show others who are transitioning, or maybe aren’t even yet thinking of transitioning, that the myth that plant-based food is boring is busted. They can see that as a vegan I eat a far more diverse diet than your typical omnivore eats because I experiment with different ingredients. Hopefully it opens up their minds to eating more plant-based one step at a time. They see through their palate that it’s nutritious delicious, healthy and not harming any other sentient beings.

HWS: If you could give some advice to someone starting this journey, what would it be?

LV: Find others who are transitioning, or who have already done that, whether it’s getting a coach to help you, or finding a group like Healthy World Sedona, or a meetup group so you can learn from others. Take it a step at a time. Not everybody is omg to become 100% plant-based overnight, so find others who have been in that process and can help in the Journey of getting to that goal. In meeting people where they’re at, do it with compassion and love, and not judgment, because everybody’s journey is different. The important thing is they decided to embark on the journey.

LV: If anyone is considering this, even if they just start with Meatless Mondays, and then move to Taco Tuesdays, the important things is that every meal they choose to eat plant-based saves some Vegan,” so the cookbook will have stories in, it  not animals, the water and the environment. Kind of Just recipes. One of the chapters will be, “Here’s my old, non-vegan recipe, here’s how I made it like the AA slogan, “Progress, not perfection.” Be gentle to yourself. The important thing is to start the journey.