The Wonders of My Garden, and The Joys of Composting

Will The Real Garden Volunteers Please Stand Out?

Back in my June 15 blog, I introduced you to my garden volunteers, who at that time had yet to reveal their identity to me.

Well, fast forward to today, and I now have fun and exciting answers.

The trellis that I had identified as thinking possibly cucumbers are not cucumbers at all.  Turns out they are cantaloupes.  In just around a month, this cantaloupe went from a small, unidentified, round, green ball to a large cantaloupe.  And as you can see, the vines on the trellis have been quite prolific.

Is That Another Cantaloupe I See? 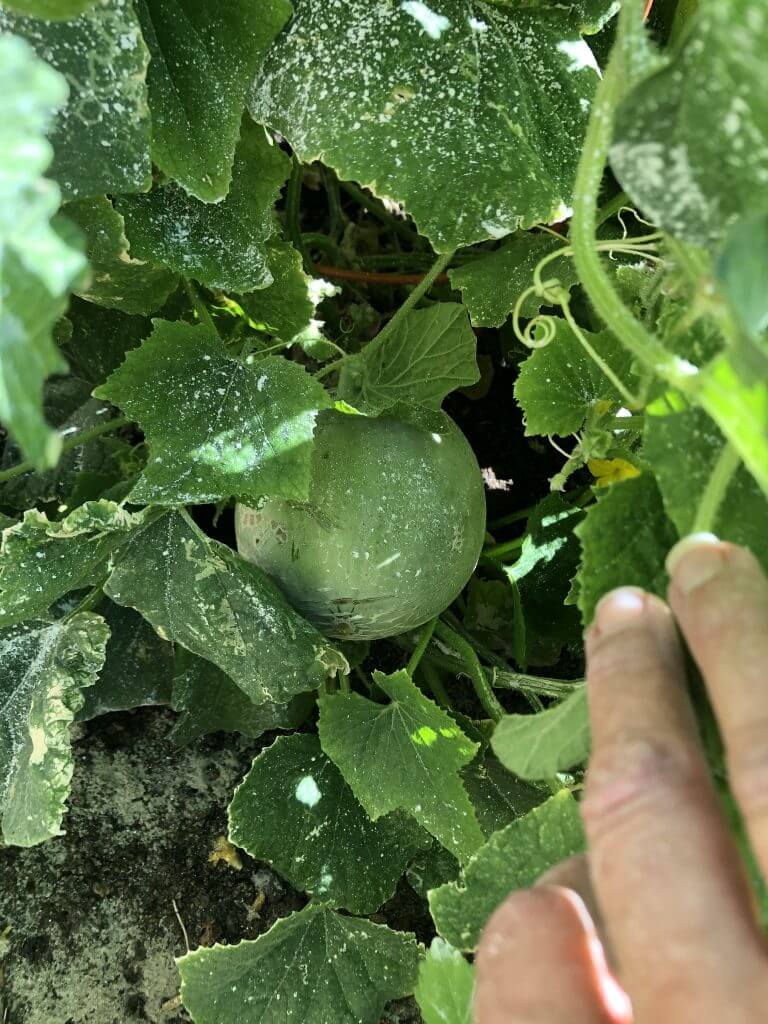 Look What I Found Hiding in The Volunteer Cucumber Trellis

The garden has truly undergone an amazing transformation since I last updated you.  Take a look at this.  This cantaloupe has appeared in a trellis of other volunteers that are in the front of the garden.  And what a sweet (literally and figuratively) surprise this cantaloupe is because it has appeared amongst a trellis of what turned out to be the volunteer cucumbers, which I was hoping for on the first trellis. 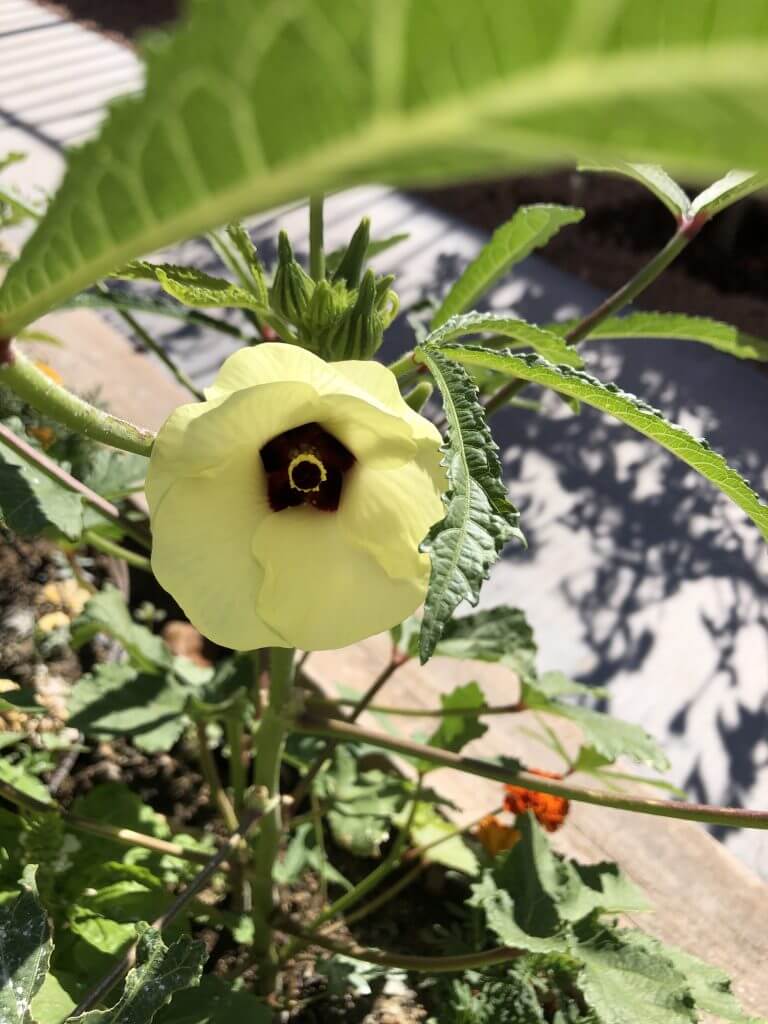 While I’ve planted both marigolds and zinnias around the perimeter of the garden for not only color but also a natural pest control, take a look at this lovely flower.  It’s from one of my okra plants, which have been providing me with several okras every several days.  I seem to be stuck on one simple preparation of breading them and air frying them at 360°F for 10-12 minutes.  I’ve yet to make a gumbo or other dish because as soon as I come into the house, I get right to it with the air fryer.  Such yumminess.  And a healthy treat after a workout in the garden.

And as for the marigolds and zinnias, as their flowers die, I crumble them into the soil so that I have a continuous growth of new flowers. 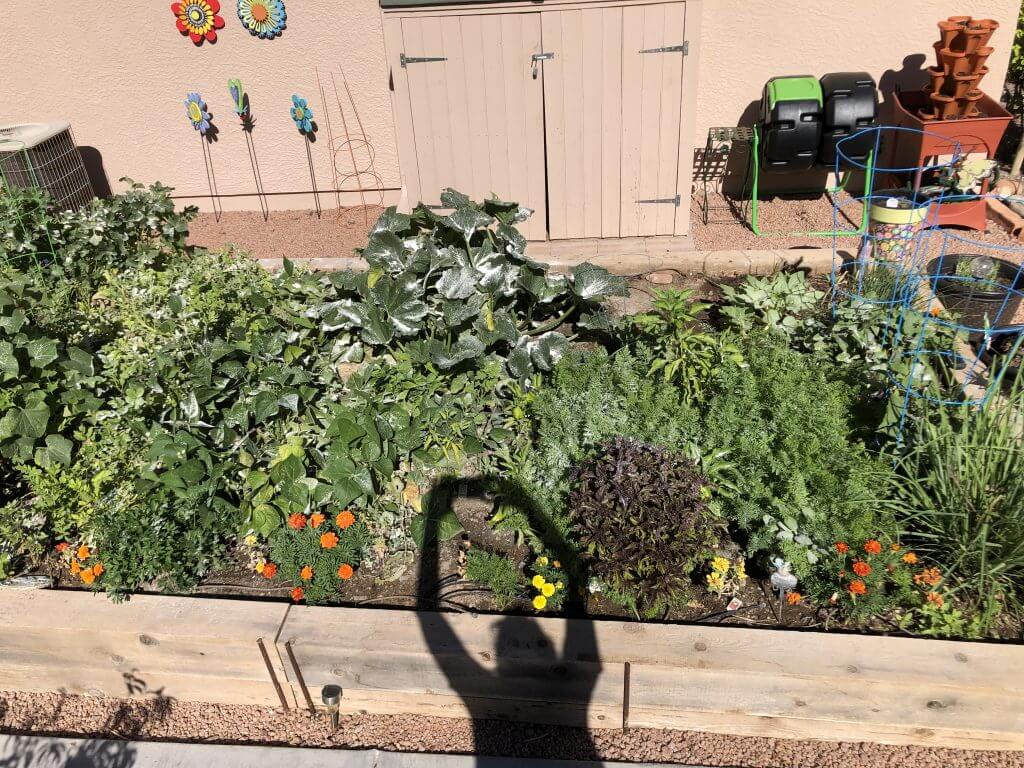 The Garden is Growing

The garden is growing in leaps and bounds. The white sprinkling that you see on the plants is food-grade diatomaceous earth.  It’s really helped to keep the insects (mostly grasshoppers) away from the garden without using any harmful chemicals.

To the immediate right of the trellises of cucumbers at the front of the garden and the cantaloupes at the upper left of the photo is the entire volunteer row of potatoes.  It really cracks me up because it truly is a perfectly straight row.  These are compost volunteers from when I was composting directly into the raised bed over the winter.  So how they opted for a straight row is a mystery to me.  I was very curious over the weekend, so I pulled one that was a single vine.  I was so excited when, at the root end, lo and behold, there was a 2” long potato that resembled an Idaho baking potato, with a thick skin.

To the right of my shadow and the ruby-ruffled basil, I planted carrots.  They are now not only in that patch but they have also enveloped the peppers plants.  I did not plant them around the pepper plants, but there you have it.  It’s actually been a good thing as they seem to be shading the pepper plants, which weren’t doing much of anything until they received that cloche. Since then, the pepper plants have joyfully been producing.

Ah, but back to the carrots. Since the potato got me so excited, I decided to pull out a small carrot green.  Totally thrilled, there was a 3-1/2” long, rather rotund carrot at the base of the greens.

I was so ecstatic that I took both the potato and the carrot and steamed them for 15 minutes.  I sliced each into three so that both my parents and I could have a taste as our appetizer before dinner.  The carrot was firm and succulently sweet while the potato had that thick Idaho potato skin while being fluffy and moist inside.  So now I must practice patience, allowing both the potatoes and carrots to continue to grow until truly ready to harvest.  But, I have to tell you, I am beyond enthusiastic.

In front of that large zucchini plant, which has been yielding a zucchini or two each week, there are bush green beans.  As soon as I harvest enough for a meal, it seems there are more to pick.  They are bulbous yet tender.  I will admit to treating myself to one or two before they make it indoors.

The two blue trellises to the right are eggplants.  There are so many on those bushes that I keep harvesting small ones, no bigger than 3-4”, to give the plant the opportunity to allow those that remain a chance to grow big.

I also have watermelon, yellow squash, garlic, and lots of herbs growing.  Other volunteers, like the onions, have all been eaten, making room for my next planting.  I have broccoli, cauliflower, broccoli rabe, and escarole started in peet seed starts in the house.  They will take the place of the onions as well as the garlic which is ready to come out.

This has been a year of so much learning for me.  And some challenges.

Tomatoes – don’t even get me started.  In prior years, tomatoes were pretty much all I planted. And they did well.  This year, I’ve tried several times with not much luck.  A couple of heirlooms and one Big Boy was all I’ve gotten.  Lots of flowers that I hand pollinated using a small brush, but no fruit.  The plants themselves appear challenged.  Not even the tomato hornworms have come around, which is a good thing; but I would have loved to have more fresh-picked tomatoes.  Oh well.  There’s always next year.

All of the Russian Kale that I planted got some sort of insect eggs on their underside of the leaves. The only thing I could do with them was to pull them out and trash them as I didn’t want them to hatch and invade the rest of the garden.

Just Call Me the Compost Master

I’ve been composting. But since the garden is now for planting, I resorted to using a very large pot that I hadn’t planted anything in.  It was cumbersome.  As the materials grew from my kitchen scraps and dried leaves, and coffee grinds, it became harder and harder for me to turn it.  I found myself not composting all that could and should have been because it was not easy.  So, I finally decided, in the interest of my back as well as the environment, to invest in a composter.

I first ordered a tumbling one that had one large compartment on a stand.  The instructions said it was easy to assemble.  Well, when it arrived, the box broken open so that I couldn’t tell if all the parts were even still there. I did, however, take a gander at the instructions.  Easy!  Maybe for an engineer, but definitely not for me.  So, back it went. 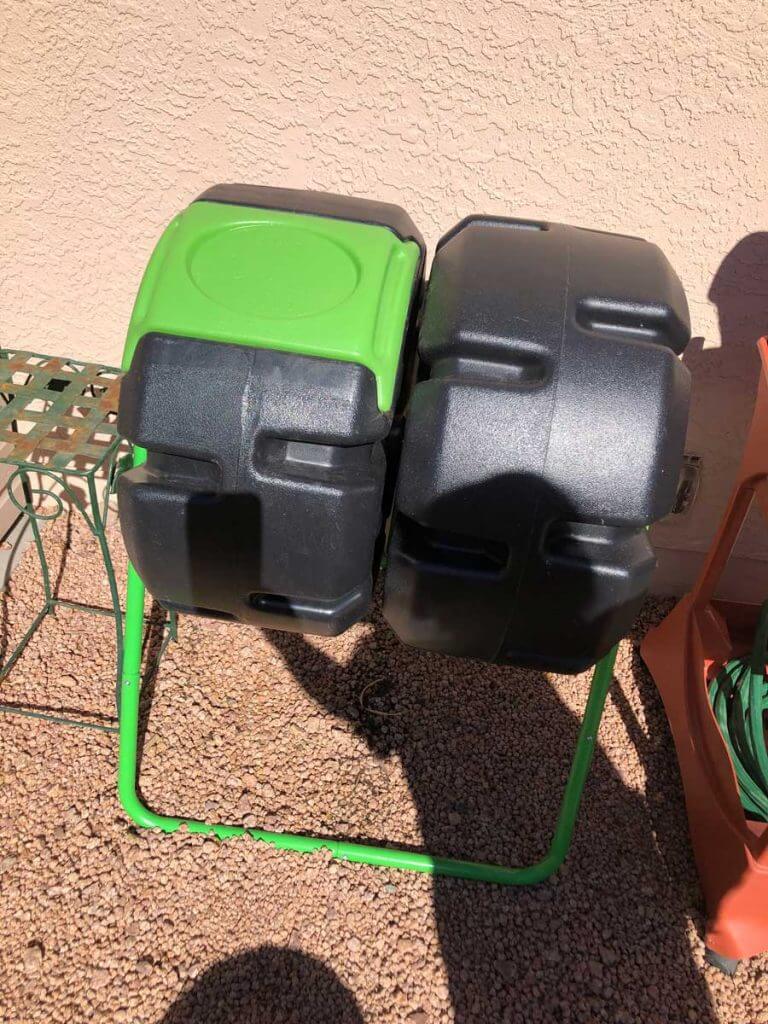 After further researching, I found the perfect composter.  And it came with only the stand needing to be assembled.  That totally worked for me.  Its size is incredibly deceiving.  My huge pot that I thought would completely fill one side didn’t even fill it one-third full.  I am completely smitten with this tumbling composter.  I’ve been using it for about a week now, and already it is starting to do its job.  And once the first side fills up, I can move on to the second side while the first side finishes composting.  Brilliant!  And all I have to do to empty it is put either a bucket or drop cloth on the ground, take off the door, spin it so that the opening faces the ground, and let the compost fall to the ground.

I found a local Facebook gardening group whose admins are Master Gardeners as well as some of the other members.  It’s a great place to commune with like-minded individuals who are more than willing to share their experiences and provide suggestions.

For my first year going solo and really being serious about gardening, from starting a worm colony, to composting, to veganic gardening, I think it’s going well.  I am enjoying the learning curve and the challenges as well as the successes.

So, I am feeling rather like Julia Child, who always used to say that if she can cook, anyone can.  So, if I can garden, you can too.  I hope this inspires you to plant something, even if it’s an herb on your windowsill.