Eating animals is not healthy for human consumption. According to T. Colin Campbell, MD, and many other plant-based experts, the consumption of animal protein can be directly linked to seven out of the top ten leading causes of human death in the United States: heart disease, cancer, stroke, Alzheimer’s, diabetes, kidney disease, influenza and pneumonia. (T. Colin Campbell eCornell University – Center for Nutrition Studies Plant-Based Certification Course).

Due to the close quarters of factory farming, these sentient beings are overloaded with antibiotics to help keep them alive in extremely unsanitary conditions. What’s the result of this practice on us humans? Antibiotic resistance, that’s what. Especially with so many Americans eating their meat rare to medium rare, the antibiotics that remain in the animal flesh is not cooked out. And that’s not the only chemicals that remain in the meat on omnivores’ plates. There are the growth hormones.

Oh, and let’s not forget that due to the poor sanitary conditions and the poor waste management (if you head down to the Southeast, you’ll find many open waste pools (manure lagoons) on the pig farms. People living close to these farms have an extremely high incidence of cancers, in addition to a myriad of other health consequences.

Recently Hurricane Florence’s effects were not only humans having to be evacuated because of flooding.  Far too many people left behind their companion animals to fend for themselves, causing them to drown with their last moments being that of suffering and literally scared till death.  North Carolina is home to many of the pig factory farms, with manure lagoons abounding next to the close, unsanitary quarters within which the pigs are forced to live.  Because these farms insure their livestock, these pigs were left behind , so here again, they were scared till death.  Horrific.  The factory farmers treated them as commodities that they could discard because, financially, they wouldn’t take a loss.  Shame on all of them!

H1N1, otherwise known as the Swine Flu and Avian Flu, are transmissible from animals to humans. According to the Farm Sanctuary, experts believe that the H1N1 outbreak was convincingly caused by the conditions that pigs live in on overcrowded factory farms with extraordinarily poor sanitation. 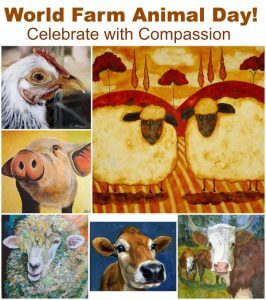 Okay, so enough about how bad it is for us humans to be consuming other sentient beings. What about these beings who are raised on factory farms?

Well, their life is, with no understatement, absolutely horrific.

Here’s a few reasons why this is true: 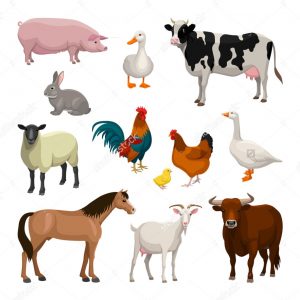 Paul McCartney is a staunch advocate against factory farming. If you haven’t seen this brief, 13 minute video starring and narrated by Sir Paul, it’s a must see. Glass Walls

Ordinarily, we tend to think of factory farmed animals as cows, pigs, chicken, and sheep. But the list is farm more extensive and not just for the purpose of human consumption.

Here’s a list that I found on Animal Sake’s website. The items in parenthesis were not on that list but rather ones that I added in myself.

Interesting how so many of us tend to not remember to include fish on this list.  They, too, are the victims of factory farming. They are fed so many antibiotics because of their cramped, close quarters, oftentimes swimming in water where they can barely move amongst the other fish and their waste products.  They are fed dyes to color their flesh what it would be if they were left in their own natural habitats to live a life of freedom from human abuse.

Fur-farmed animals were also not included in this list. While years ago most were caught in traps in the wild, thus called “wild fur”; that has not been the case for quite a while. They, too, are fatalities of factory farming. Mink, chinchilla, fox, rabbits, and yes, even dogs and cats, are amongst this list. 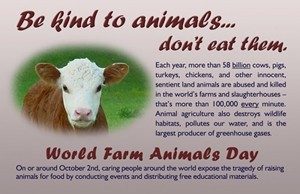 As we reflect on today being World Farmed Animals Day, please take several moments of silence to honor, reflect, and mourn the lives of our fellow sentient beings whose lives we have made torturous, disposable, and commodified.

Make this a call to arms. Donate your time and/or money to a sanctuary. Protest the methods allowed in raising animals for human consumption and use. Send letters to your political representatives urging them to enact stronger regulations. 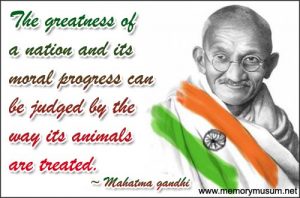 Educate someone who is an omnivore about:

The realities of factory farming.

The practice of Ahimsa (non-violence and reverence for all life).

The benefits of a vegan, plant-based diet.

And pray (if you feel so inclined)  for and envision a peaceful world where animals no longer suffer to please our palate or adorn our bodies.