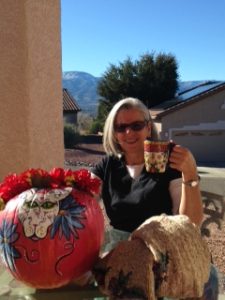 “I don’t eat anything that had a mother or eyes, potatoes excluded” became my motto the day I turned vegetarian back in February, 1984.

But, here’s the thing….it took me until one fateful airplane ridge in January, 2008, while reading the book, Skinny Bitches, by Rory Freedman and Kim Barnouin, to realize that by my continuing to consume dairy and eggs, I continued to contribute to the needless suffering of animals. The “Happy Cow From California” was not only a myth, it was a total and absolute lie!

It was at the moment that I immediately knew my life was forever changed. I immediately withdrew my support from the slaughter, pain (physical, emotional, and spiritual), and captivity of other sentient beings; and thus began my journey of becoming and being vegan.

While I considered myself vegetarian up to that point, I instantly realized that being vegan was far more than simply a food plan, what I ate. It was a lifestyle, a commitment to the philosophy of ahimsa, dynamic harmlessness.

Having a plethora of my own original recipes, I embarked on the challenge of converting them to include only vegan (plant-based) ingredients that would not only satisfy vegetarians and vegans, but possibly more importantly, omnivores (since I was pretty much the only vegan in my life at that point other than the people I met at the Vegetarian Society of South Jersey several months prior).

Through feeding others the food that now fully embraced my new vegan lifestyle, conversations opened up regarding how I was able to make these amazing dishes that were completely satisfying to the palate of my friends, loved ones, and colleagues. I could and still do speak from the heart with enthusiasm about my love for all things culinary.

Over these past years, I’ve gathered groups of people outside of my vegan world to “break bread”. It’s my opportunity to showcase the amazing flavors and textures, many reminiscent of what an omnivore might find on their plates at any given meal, but that are created without causing any harm whatsoever to any other sentient being. I gladly and openly share any recipe and tips as a way to spread the message that we can nourish our bodies with the most delectable dishes with a clear and non-violent conscience.

One of the most common beliefs that I hear from omnivores is that my vegan diet is restrictive. What I prove to them time and again is quite the opposite….that my food plan is far more expansive than what they put on their plates. Not only is it more capacious, it includes an enormously diverse selection of plant-based ingredients, including herbs and spices, that burst upon the palate.

What I didn’t realize until very recently was that, through this process, I have become an “accidental activist”. My activism takes the form of exposing people to the culinary delights that abound on a vegan, plant-based diet. By my “talking food” ad infinitum, it has become my platform, my place of comfort, where I can expound upon the benefits of living a vegan lifestyle (not just a food plan), coming from a place of compassion, non-violence, and love in my heart.

So, in pondering all of this, I realize that, concurrent with my evolving from being an accidental activist into an acknowledged vegan activist, I am also an advocate…that each and every time I speak about my vegan lifestyle and refraining from contributing to the suffering of other sentient beings, that I am giving them voice…that my voice is being used to speak for those who have no way to speak for themselves.

So, if you are reading this post today, I ask you to take a moment to ponder about and then initiate one thing that you can do today in the spirit of ahimsa towards (an)other sentient being(s). And then go through that process again tomorrow, and the day after that, and the day after that, until suddenly you realize that it has simply become a part of who you are.