National Pigs in a Blanket Day 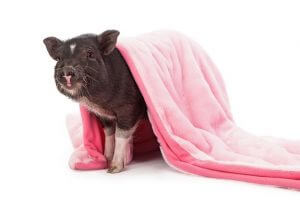 The only pigs I wish to see in a blanket are sweet, cute, cuddly sentient beings lovingly lavishing and basking in the warmth of a fleece blanket.

Yet, today is a national celebration of a food item which exemplifies the tolerance of phraseology, etc., which minimizes and/or tolerates references to the violence of sentient beings.

Although there is much evidence that shows people enjoyed small frankfurters or sausages wrapped in dough long before, the first reference to the food item that is referred to as “pigs in a blanket” appeared in the 1957 edition of the Betty Crocker’s Cooking for Kids cookbook.

Since today is celebrated as National Pigs in a Blanket Day, this got me thinking…

I googled ‘pigs in a blanket’ and almost without exception, every description was a small, bite-sized hot dog (albeit sometimes sausage) wrapped in dough.  Well, if this item is typically a hot dog, why was it not called “dogs in a blanket”?  It would certainly seem more accurate. 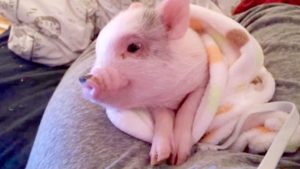 But first, why is a hot dog called a hot dog?  It is believed that the frankfurter originated in Vienna, Austria.  The word “Vienna” in Austria is Wein, thus weiner.  But, Frankfort Germany also tries to lay claim, thus frankfurter.  However, regardless of where this link-type food item originated, Germans called it a dachshund sausage; and it was eaten with bread. This made its way to the streets of New York City, the Bowery, in the 1860s.

The term ‘hot dog’ took its place in history at the New York Polo Grounds in 1901, when they were being served out of hot water vats to the hollers of the vendors to get them “while they’re hot”.  A sports cartoonist, observing this spectacle, drew a cartoon of barking dachshunds wrapped in rolls.  Not sure of how to spell the word ‘dachshund’, he wrote the caption “hot dog”*.

Ah, so here’s my opinion on this and why we call it ‘pigs in a blanket’ when it is wrapped in dough and baked rather than served on a bun…

I would bet that the reason it was NOT called “dogs in a blanket” go straight to the heart of how so many of us talk about how much we love our companion dogs (or cats, or birds, etc) yet continue to eat pigs, chickens, and cows, etc.  Here in the U.S., we wouldn’t dream of eating our dogs, so instead, I believe that Betty Crocker decided upon the euphemism of “pigs in a blanket” instead.  After all, it’s okay to eat a pig, right!?

Now, I have no evidence to prove this point. This is merely my opinion, purely my conjecture…but I would bet you that I’m probably right on point on this one.

Thus, given the fact the I’ve been really mindful recently to no longer use phrases that support the violence of sentient beings (i.e., kill two birds with one stone, more than one way to skin a cat…I think you get my point), I am no longer going to refer to small hot dogs or sausages wrapped in dough as a “pig in a blanket”.

Does that, then, mean that I can no longer call a hot dog by that name?  I suppose, if I’m being precise about this, then the answer would be a resounding ‘yes’.  Okay. Okay. Add one more to the list. Frankfurter.

Be sure to follow my weekly blog to get more Veganification on a regular basis!